(September 27, 2013 – Toronto, Ontario) It begins with a long, slow fade up from black and the ever-increasing sound of rushing water. The image when it finally forms is of a dam in China dumping millions of liters of silt-filled water per second. If they didn’t do this the silt would build up behind the dam ultimately rendering it useless. The camera holds on this opening scene for quite a long time and the way the darkened water cascades and the noise it makes and the shape it transforms into as it falls reminded me of the old Irish myth of the Banshee, a wailing female spirit, a harbinger of death. It is a fitting image, even if unintended, to begin this documentary about the one thing we cannot live without.

Director Jennifer Baichwal and large-format photographer Edward Burtynski have worked together before. Their first collaboration resulted in the award-winning documentary Manufactured Landscapes. This time it isn’t about the land and Burtynski is credited as co-director.


Over the film’s 90-minutes, Baichwal and Burtynski visit ten countries to capture the way water is used and usually abused. It is disturbing, sad, and in most cases overwhelming. Overwhelming in the vast scope of the images being shot, and overwhelming in the realization that it may be too late to save our small, blue planet. The best illustration of that comes from scenes in the documentary, scenes that began when Burtynski first started to do the research for what he then called his “Water project.” In describing part of that early process, Burtynski wrote in the media notes, “I categorized the images into: distress, control, agriculture, aquaculture, waterfront, and finally source. Distress included landscapes such as the Colorado River Delta, that has not seen a drop of water from that river in over forty years, and is now a desert; or Owens Lake, that saw its water diverted to Los Angeles in 1913 and is now a dry toxic lakebed.” The image of the Colorado delta ending in what is now a desert was used in the poster for the film.

The images themselves are beyond large. As a comparison, once upon a time the early digital cameras captured an image that was 640 pixels wide. The first high-def cameras doubled that to 1280. Most new digital films are made on cameras that are called 4K. That is they capture an image that is 4000 pixels wide. For Watermark the filmmakers, particularly co-producer and cinematographer Nicholas de Pencier, worked with an astounding 5K camera. I wish I could have seen the movie in an IMAX theatre.


As the filmmakers travel the world to tell their stories, we see the change man has caused and the changes now that nature is making thanks to the impact of decisions and of the indecisions of man. From vertigo-inducing vantage points on China’s Xiluodu Dam as it is being built, to India and the Maha Kumbh Mela, a Hindu pilgrimage of faith that often brings more than 35 million people together to cleanse themselves of their sins in the Ganges. We see massive, floating, artificial islands of fish farms, united against the ocean`s fury and providing a way of life that seems intrinsically ancient yet is the result of the very modern need to feed an exploding population. If you begin to wonder if any of this is sustainable then the filmmakers have done their job. Back in China we visit Yunnan’s rice paddies where people keep watch to make sure water isn’t diverted from 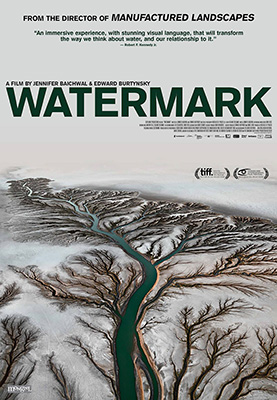 one growing area to another and then to Greenland to see how scientists are tracking the changes in world weather by looking at the details of ice crystals from decades of ice core samples. It is a marvelous journey that is as beautiful as it is frightening.

I was struck by the end scene. Mirroring the opening, it is a long, slow exploration down a pristine British Columbia river valley. The camera, on a helicopter, flies on and on. Is this a political statement or a dire warning? Probably both. Having seen how mankind has destroyed the most precious thing on earth, this steep river valley is devoid of people. It is in this continuing, unedited shot a reminder of how things once were everywhere on Earth and, by comparison to the opening sequence, provides an example of how far we have come in the destruction of our planet. It is the summation of a cautionary tale.

If the filmmakers fail anywhere, and that is a big if, I felt the film ended with no call to action. The very thing that makes this documentary extraordinary, the size of the images captured to illustrate the size of the problem, should have left me feeling compelled to change my ways, to write to my member of parliament, to cut a cheque in support of some environmental group somewhere, but I felt none of that. At least not immediately. As I mentioned earlier, I was overwhelmed. Confronted with a problem that is so large I felt helpless, unsure of what I could do, should do.

What I can do is urge you to see Watermark. Keep in mind that there is no new water. What we have is all we’re going to get and while it does get recycled through nature`s own magical system, we have reached or are rapidly approaching a point where demand will exceed supply. Down through the centuries most wars have been fought over territory, land. In the future it is quite possible wars will be fought over water. Do we really want it to come to that?