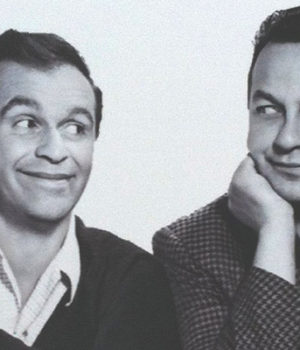 (May 3, 2016 – Toronto, ON) Organizers of the Toronto Jewish Film Festival know a good thing when they see it. What they’ve been seeing is a lot of interest in Canada’s famous comedy duo, Wayne and Shuster. So, as they say in showbiz, due to “popular demand” there will be a second screening of the Wayne & Shuster tribute at this year’s festival, which kicks off this Thursday, May 5 and runs until May 15.

The first screening –which has gone to rush tickets only– takes place Saturday May 7 at 1:00 pm at the ROM’s Eaton Theatre, followed by a panel discussion, moderated by Mark Selby, featuring special guests Rosie Shuster, Michael and Brian Wayne, Don Cullen, Corinne Conley, and Norman Jewison. Rosie Shuster and both Waynes have confirmed their attendance at the second screening as well. Both screenings are free ticketed events. Advance tickets may be ordered in-person at any TJFF Box Office.

This is a rare opportunity to enjoy Johnny Wayne and Frank Shuster as they were seen in the earliest days of Canadian TV. The tribute features three episodes from Wayne & Shuster in Black & White, a retrospective series (hosted by Shuster) that includes their iconic Shakespearean Baseball sketch and “Rinse the Bloor off My Toga”, among other comedy classics. Also part of the programme will be a 1965 episode of “Telescope”–a must for Wayne & Shuster fans– where the duo travels to both England and the Charlottetown Theatre Festival.

These screenings are part of the Festival’s Canadian Archival series entitled Jewish Images from a Golden Age of Canadian Television, which focuses on Jewish representation during the first dozen years of CBC Television (1952-64). This curated series features rarities from the CBC archives, including a rarely-shown 1955 episode of a drama anthology, On A Streetcar, starring a young William Shatner.

On the occasion of the Wayne & Shuster tribute, TJFF is also presenting their delightful 1988 musical comedy Wayne and Shuster: Once Upon a Giant for kids, parents and grandparents all of all ages, It is also a free ticketed screening scheduled for Saturday May 14, 11:00 am, at the Innis Town Hall.