Home News We Missed an Anniversary

We Missed an Anniversary
by Ralph Lucas – Publisher

(May 17, 2021 – Toronto, ON) Sometimes we all get a little too busy than we should and in publishing that often that means missing stories we should have covered. Apologies. A few days ago, May 13, marked the 20th anniversary of Zacharias Kunuk’s first feature film, Atanarjuat the Fast Runner being presented in the Un Certain Regard section of the Cannes Film Festival. It went on to be honoured with the prestigious Caméra d’Or award for the best first film in all sections of the festival since 1978. While the award was well deserved and most welcome, it also marked an important step in the recognition of an Aboriginal production that has since grown in stature over the years. Inuit and First Nations filmmakers from Canada and elsewhere have benefited from the exposure that Cannes has given to this work, which is entirely in Inuktitut. 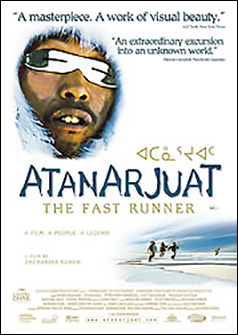 Atanarjuat the Fast Runner stars Natar Ungalaaq, Paul Qulitalik, Madeline Ivalu, Sylvia Ivalu, Peter Henry Arnatsiaq and Lucy Tulugarjuk in the lead roles. The plot is both simple and complex. It is a story of love as well as a story of Good vs Evil as well as a documentary-style look into the legends of our Indigenous neighbours that the vast majority of us will never get a chance to meet. Evil, in the form of an unknown shaman, divides a small community of nomadic Inuit and upsets their balance and soul. Twenty years pass. Two brothers emerge to challenge the reign of evil: Amaqjuaq, the strong man, and Atanarjuat, the fast man. Atanarjuat wins the hand of the beautiful Atuat at the expense of Oki, the boastful son of the camp chief, who swears revenge. Oki ambushes the brothers in their sleep and kills Amagjuaq, while Atanarjuat miraculously escapes by running naked to the horizon over the spring sea ice. But will he escape the whirlwind of revenge left behind?

Produced by Isuma (located in Igloolik – Nunavut and still active in both film and television) Atanarjuat the Fast Runner is the only film in Canada to have won the Caméra d’Or award. The Canadian release of the film, originally scheduled for September 11, 2001, was postponed to April 12, 2002. Late Isuma co-founder Paul Apak Angilirq wrote the screenplay and the dialogue of the film. In addition to directing, Zacharias Kunuk edited the film with Marie-Christine Sarda and Norman Cohn, also director of photography. Chris Crilly composed the music of the film while James Ungalaaq was responsible for the sets.

Isuma will celebrate this 20th anniversary in the fall. Atanarjuat the Fast Runner is distributed by Entertainment One and is available on the iTunes platform.