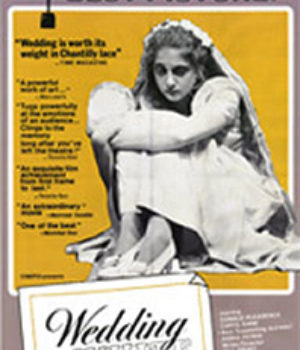 Written, and directed by Bill Fruet, Wedding In White is an unflinching look at the ugly, callous side of human nature. Released around the same time as Paul Almond’s Journey, whereas Almond approaches his subject in a roundabout symbolic way, never reaching the centre, Fruet strikes at the heart of his subject, never using fancy extras. Whereas Almond is annoyingly self-conscious, Fruet is analytically objective, albeit not without sympathy.

The plot is simple and set in wartime Canada. Jimmie returns home for a short leave and brings with him his buddy, Billy. They’re already drunk, loud and ready for some good times. Off they go to the local legion with Jimmie’s old man, and they return roaring drunk. Billy, in a blind stupor, rapes Jimmie’s sister, Jeannie. Naive and terrified, Jeannie doesn’t mention the assault until three months later, when she tells her mother she is pregnant. When the

father finds out he beats her mercilessly and orders her out, but upon later reflection he decides the best course would be to marry her off to his drinking buddy, a middle-aged bachelor.

The film ends with the mockery of a wedding. The central character is of course Jeannie played by Carol Kane. A fragile, lonely child of sixteen, Jeannie is naively charming. She is a child who worships her elder brother and delights in small pleasures, such as red wrapping paper and glittering broaches. Her room is harsh and brutal. The family is poor; communication between its members is virtually nil. Her father (Donald Pleasance) is a retired veteran from the first world war and is a guard at a local prison camp. This is a lowly job in his eyes because he feels it is more honourable to be shot than taken prisoner. He takes his failures in life out on others, rarely speaking to Jeannie or even acknowledging her presence. His only solace is drinking and the “honour” to be serving England. Her mother is hardly any better. When Jeannie tells her of the assault and resulting pregnancy she cries for herself, not Jeannie.

Her brother ignores her, and his best friend Billy makes his sexual intentions clear right from the start. Her only friend Dollie abuses and mocks her is as flamboyantly sexy as Jeannie is naively innocent. Yet DollIe has learned to take care of herself in this world. Jeannie never learns.

Carol Kane as Jeannie is perhaps a bit too weepy-eyed to be believable, but is nevertheless effective in her role. Donald Pleasance is, as always excellent and does his best bit when addressing the local legion after receiving a

prize for organizing social activities. Paul Bradley (Jimmle) and Doug McGrath (Billy) are both very good, their last roles together being in Don Shebib’s Goin’ Down The Road.

However, the film ultimately rests on Writer/director William Fruet’s shoulders. He has worked Shebib on Goin’ Down The Road and Rip-Off, so is in a way established in the Canadian film industry. Unfortunately Fruet the director occasionally lets down Fruet the writer in Wedding In White. The script is excellent, much of Jeannie’s character being implied rather than openly stated. The directIon at times, however, is cramped, and the connections that the audience could easily make in its own mind from the script are made for them by the camera. Over-directing seems to be the common element in first films by young directors. Targets by Bogdanovlch is another case in point. Fruet seems nervous that his audience will miss something if he doesn’t spell it out. Yet Fruet has style and a strong story sense that we should be seeing more of in the future.

Back to the Cast & Crew of Wedding in White.

The images used in this review were scanned from an original still set for Wedding in White in the Northernstars Collection.