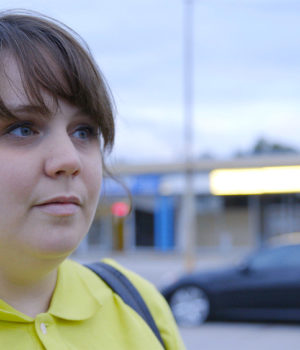 (November 9, 2016 – Toronto, ON) Toronto-based director and screenwriter Joyce Wong has had a big break with her first feature-length film. The award-winning director behind a string of shorts turned to Kickstarter to help finance an idea she had about modern day romance in a film titled Wexford Plaza. Northernstars learned today that Wexford Plaza has been selected to screen at the 34th Torino Film Festival in the Festa Mobile Section.

Wexford Plaza is a slice-of-life comedy about two losers who are earnestly trying to improve their condition, but ultimately become deluded by their dreams. Set in the Scarborough, the movie follows Betty (Newcomer Reid Asselstine, pictured), a lonely strip mall security guard, as she struggles to deal with the consequences of a misunderstood sexual encounter with her deadbeat paramour
(Darrel Gamotin). As Betty and her paramour’s lives unravel, the film explores what it means to come of age in a time when technology keeps us permanently tethered to our peers and their successes, but yet can also make us feel like the whole world is a million miles away. Just think Amy Schumer combined with Lena Dunham, but if both of them were sincere.

Production of Wexford Plaza was financed with the support of the Canada Council for the Arts and the Ontario Arts Council, and launched a Kickstarter campaign to raise the funds required to output the film and take it through its international festival run.

Co-producer Matt Greyson is a Toronto-based feature film and music video producer. He graduated from York University’s Film Production program along with Joyce Wong. He’s a long term collaborator of Matt Johnson as the assistant director on The Dirties and Operation Avalanche and the field producer on VICE’s new scripted comedy Nirvanna the Band the Show. Co-producer Harry Cherniak’s most recent short film, Winter Hymns, won the Grand Jury Prize at the 2016 Slamdance Film Festival, making it eligible for a 2017 Academy Award nomination. While working for four years as a corporate lawyer, he produced three short films: Soap (TIFF ’09, CBC), Pathways (TIFF ’11), Broken Heart Syndrome (TIFF ’12, Air Canada, CBC, Virgin Atlantic). Harry recently began working as the Director of Business Affairs for Darius Films, and also just completed his 10th TIFF as a publicist for Star PR (Mongrel Media). Additionally, Harry serves on the board of directors of Toronto’s Inside Out LGBT Film Festival.