Home News What Are You Watching? 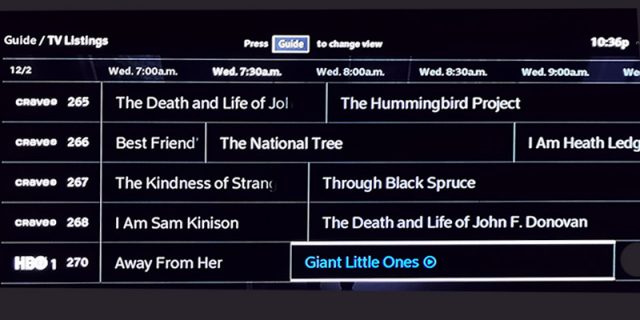 What Are You Watching?
by Ralph Lucas – Publisher

(December 7, 2021 – Toronto, ON) A few weeks ago we launched a small, test survey about Canadian TV viewing habits. Far from scientific, we were looking for some general impression of how Canadian TV viewers feel about certain aspects of their TV habits and how they might react to some changes if those changes became available.

The survey began with some questions about the people who took the minute or so to respond. By Question 4 we were starting to hone in on the issue:

We were pleased to see that 81% of respondents actively go looking for Canadian-made movies, shows or series. But we wanted to gather responses to a more direct question. 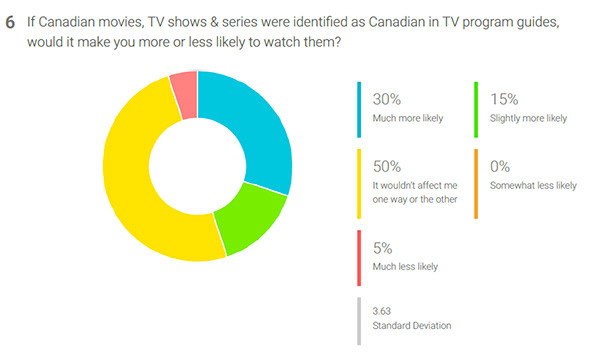 Again we were happy to see that 45% of respondents would be more likely to watch Canadian programming if it was identified. When you add in the respondents that stated it would not affect their choices one way or the other a remarkable 95% would welcome or not object to having Canadian shows identified. What might that look like? Using an image of the Crave service on Rogers Cable, we show it before and after the addition of a simple CANCON identifier:

Those images were not used in the survey. It should be noted, The Kindness of Strangers is a Canadian co-production, but we didn’t use an identifier for it as it would not have been visible in the image we were using. When we asked a more specific question about identifying Canadian content, an impressive 80% said cable companies should. Only 5% answered “Absolutely not.” 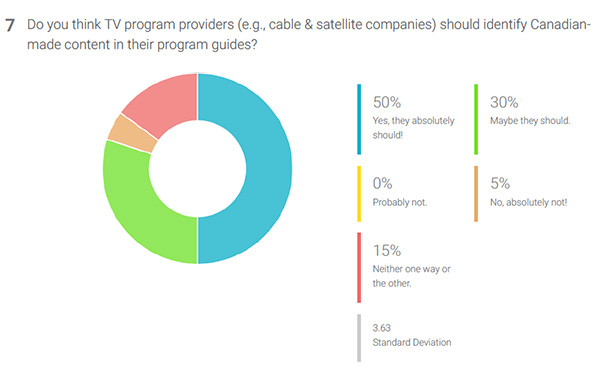 Broadcasters generally prefer the CRTC stay out of their way and as a former broadcast exec, I can sympathize although I fully supported and still support the concept of regulations guaranteeing Canadian creators can see and hear their work on their national and local stations and networks. But we wondered if networks balked at the idea of adding a CANCON identifier, should the CRTC consider becoming involved. 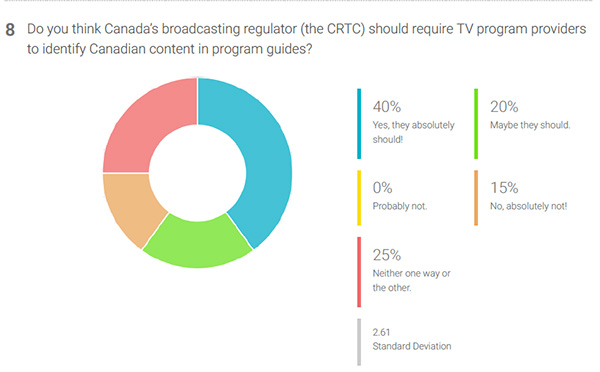 As you can see, fully 60% of respondents would support the CRTC if they required TV program providers to identify Canadian content in their program guides. Only 15% responded “Absolutely not.”

We’re not advocating regulations at this point, but we do think the people who run cable TV might want to get ahead of all this. Adding a simple image is technically possible (we checked) and it would be, based on this simple survey, welcomed by a majority of viewers.

It is our hope that in 2022 we can launch a much larger survey. We expect it will validate these numbers and it is our sincere hope that networks respond favourably to this simple suggestion to give cable subscribers an improved service, a service they are paying for.

Festival News from All Over