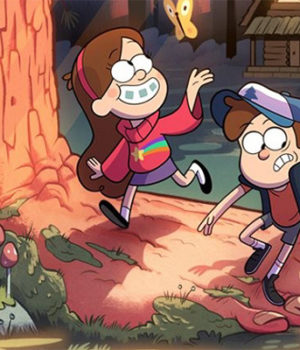 (February 8, 2016 – Toronto, ON) If you love animation, or work or study animation, TAAFI is the place to be in early 2016. TAAFI is the Toronto Animation Arts Festival International. This year the festival runs from April 22 to the 24 at the Waterfront Campus of George Brown College and the list of guests keeps getting better and better.

There will be more announcements in the near future, but this is what we know now:

Eric Goldberg is best-known for his work with Walt Disney Animation Studios: Supervising Animator of the Genie in Aladdin, Phil in Hercules, and Louis, the trumpet-playing alligator in The Princess and the Frog. Eric also co-directed Pocahontas, and directed Rhapsody in Blue and Carnival of the Animals (FANTASIA/2000). He was recently Head of 2-D Animation on the Oscar-nominated Mickey short, Get a Horse.

Marv Newland made the 90 second long Bambi Meets Godzilla (1969). He continues making animated shorts with his company, International Rocketship Limited and the NFB. Titles include: ANIJAM (1984), Black Hula (1988), Pink Komkommer (1991), Postalolio (2008), CMYK (2011). In 1995 he won the Annecy Animation Festival grand prix for the 30 minute long Gary Larson’s Tales From The Far Side. He has designed and directed tv commercials and tv series.

Audu Paden has, over a thirty year career, produced and directed over 200 hours of television programming and fifteen CGI features. He has received the Peabody Award, the Media Access Award, a Gemini Award and two Daytime Emmys. Credits include 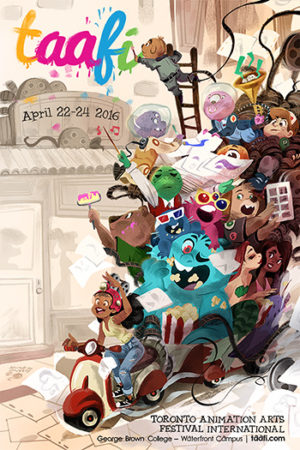 Animaniacs and Monster High. Raised in West Africa and the United States, he encourages the rumour that he was raised by apes. He went on to study theater at Northwestern University and film at UCLA.

Michael Rianda is best known as creative director on Gravity Falls on Disney TV. He is currently developing a feature at Sony Animation. He got his start at age 11 when he faced a hard truth: he was a loser that wore sweatpants everyday. To escape the mockery of his classmates, he exploited his only two marginal skills; making bad jokes and drawing. This led him to a job in animation. He loves cartoons more than any grown man should.

Stevie Vallance is a voice-over artist. She has extensive experience as an Actor and is an Emmy Award-winning Voice-Director. For 25 yrs Stevie Vallance infused life and personality into characters on thousands of animated productions. Her acting, casting and directing credits include Madeline, Reboot, The Ropers, Care Bears, Ghost Busters, Donkey Kong and ZoobileeZoo. Vallance is currently the Voice Director on Mysticons for CORUS.

Michel Gagné continues to add to his body of work which includes animation and VFX on over 20 feature films (including Iron Giant and Ratatouille). He has won a BAFTA, an Annie, and has received numerous prizes and nominations from the animation, video game and comics industries. He has also authored several books, including two graphic novels with Image Comics (The Saga of Rex, ZED: A Cosmic Tale) and one Eisner Nominated book for Fantagraphics.

Of special interest to fans of Hanna-Barbera cartoons will be the appearance of “The Three Tooners” as TAAFI is calling them. While all three men worked at Hanna-Barbera it’s their much broader careers that should be of interest, including work on some of the most iconic Disney animation titles. 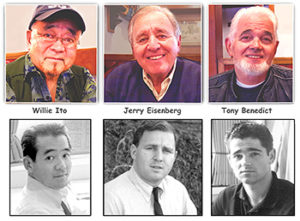 Willie Ito is an American writer, animator and illustrator known for his work with Disney, Hanna-Barbera, Warner Bros, Chuck Jones and Friz Freleng. His career started at Disney working on the iconic spaghetti kissing scene on Lady and the Tramp. He then worked at Hanna-Barbera on The Flintstones and Yogi Bear. Later he worked at Warner Bros on The Bugs Bunny/Road Runner Show. Willie career as an animator/cartoonist spans nearly 60 years.

Tony Benedict is an American film producer, director, writer and storyboard artist known for his work with Walt Disney Productions, Hanna-Barbera, Friz Frelong, Warner Bros and Marvel Films Animation. For the duration of Tony’s career he has worked on many projects such as Sleeping Beauty, 101 Dalmations, Mister Magoo, The Flintstones, The Jetsons, A Yellowstone Christmas, Santa and the Three Bears, Pink Panther, Bugs Bunny and Daffy Duck.

There’s much more information on the TAAFI website including a background piece on how the 2016 TAAFI poster was created. Passes to attend the April festival go on sale on February 22.