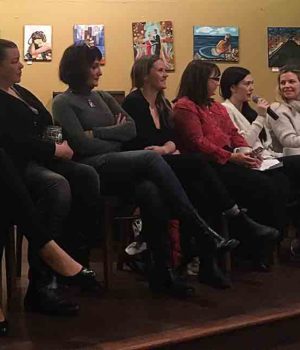 (February 24, 2017 – Vancouver, BC) At the February 21st William F White Networking Breakfast, a lively filmmakers panel provided an inspiring start to a bright Tuesday morning in Vancouver. As discussion unfolded around the myth of women led projects being limited in scope, Women in Film and Television (WIFTV) Executive Director Carolyn Combs piped up from the back, offering a succinct response: “Women make as many kinds of films as there are women,” she said.

Now in its 12th year, the WIFTV Film Festival aims to showcase a stimulating selection of local and international films with women at the helm. Beginning on International Women’s Day March 8 with panel discussions, fireside chats, and of course, film. This year’s event runs to March 12th. On March 10th Telus STORYHIVE funded shorts, all directed by women will screen at a free event at the Vancity Theatre.

Combs says this year’s films highlight the diversity and unique voices of female cinematic storytellers from around the world. As the selection process unfolded, films made by women from the Muslim diaspora were capturing the imagination of the programmers with challenging and exquisite cinematic works, but Combs notes curating these films wasn’t a conscious decision. “I think the selection committee is responding to films that feel relevant and important, she says. In addition, the scheduling of films means festivalgoers can see all the films and engage with creators and audience members. “We don’t overlap any of the films we use. It’s an intimate festival where you can really engage with the filmmakers and other people in the audience.“

The festival creates opportunity to engage with filmmakers through fireside chats in the atrium and panel discussions provide a proximity to the creative process of female art makers in a way that can be difficult to access otherwise. “These are rare opportunities to speak with filmmakers, she says.

The opening night film, Breath from Iranian filmmaker Narges Abyar fuses live action and animation to craft a visually compelling story of a young girl discovering her voice amid the Iranian revolution.

On March 11, A Revolution in Four Seasons from Tunisian-American director Jessie Deeter follows two women from vastly different backgrounds as they struggle to see their vision for a new Tunisia. It also illuminates how Tunisia became the only Arab country to emerge from the mass uprisings of the Arab Spring as a functioning democracy.

Palestinian director Hind Shoufani has crafted an ode to her father, Dr. Elias Shoufani, a prominent scholar and analyst of Israeli dynamics. She describes Trip Along Exodus, which merges poetry, animation, and archival footage as “an homage to my dad, an ode to Palestine, an ode to the revolution, an ode to socialist thinking, a call to rebellion perhaps, a call to remembering who the enemy is and a portrait of a visionary, powerful man who was very much a tragic and broken figure by the end of his life.”

Unveiled: The Kohistan Video Scandal is a documentary led by BC filmmakers about the unsolved disappearance of a group of young Pakistani women, possibly punished for the crime of singing and dancing on video. For writer/producer Elizabeth Sanchez, packing up and filming in Pakistan was an exercise in trusting intuition and responding to the myriad challenges with resilience and tenacity. She also notes she questioned the process throughout the making of the film. “Are we being patronizing?” she wondered, adding that with her background in television and more linear documentary projects, she had to learn to trust in a new method of storytelling that was at times chaotic and uncertain. “It’s a completely different creative process. It’s your vision of the truth.”

For Julia Hutchings, taking a five-year hiatus from filmmaking helped develop her voice and process. Her project, Here Nor There explores a family grappling with loss and tragedy. “I needed to live and experience things. It was hard to jump back in. But I had to learn not to be a perfectionist. It hinders forward momentum,” she says.

As national funding bodies, including the National Film Board (NFB) and Telefilm have announced gender parity in grants and financial support, Combs says it’s too soon to tell how much of an impact these decisions are making for women makers striving to get funding and equal pay. She points out many of the women on the panel had to struggle to fund their projects.

“The jury’s still out. Hopefully, we’re going to see change. There’s a community of women supporting each other. After an event like this, you certainly feel the energy of women filmmakers.
“