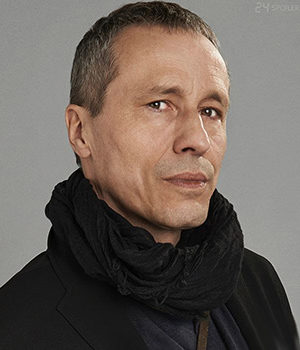 With a mesmerizing raspy voice, and sharp, brooding features that enable him to play evil otherworldly characters, and villainous literary figures with ease, Michael Wincott is one of the most recognizable character actors of the last ten years.

Michael Anthony Claudio Wincott was born on January 21, 1959 in Scarborough, Ontario, to an English father and an Italian mother. He and his older brothers were raised in London, Ontario, where both Michael and his brother Jeff expressed an interest in drama. But where Jeff excelled more in athletic pursuits (he has gone on to make a name for himself as a martial arts actor), Michael found himself drawn to music. He played the drums in a number of jazz bands, and learned to play the guitar and the harmonica.

In high school Wincott studied drama and appeared in some student stage productions. After graduating from high school in 1977, he attended Victoria College in Toronto, where rumour has it that he took up residence in the South House on campus because it was 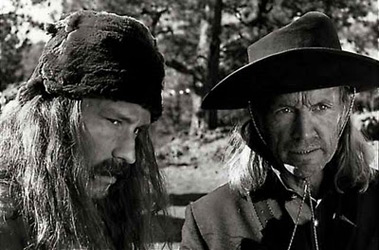 where his idol Donald Sutherland had roomed while attending university there.

Wincott continued to appear on stage during his two years at Victoria College. His screen acting career began at the age of 20, when he appeared on an episode of the much-loved CBC drama The Littlest Hobo; in the Canadian boxing thriller Title Shot (1979) with Tony Curtis; in An American Christmas Carol (1979) a TV adaptation of Charles Dickens’ classic; the TV movie The Family Man (1979), and the Canadian family adventure Wild Horse Hank (1979).

In 1982, he was accepted into New York’s prestigious Juilliard School of Drama. He continued to win roles in feature films and TV series while studying there. By the time he graduated in 1986, he had nine films to his credit.

Slowly, Michael Wincott was developing his niche as a character actor. With his corrosively raspy voice, and cold expressions, he was being regularly cast as a villain.

He got a huge break when he was cast in Oliver Stone’s Talk Radio (1988). He had been playing the role of Kent in the stage version for years, and though he loathed the character, he was the unanimous choice to bring the troubled street kid to onscreen life.

Wincott must have made a big impression on the director, because Stone cast him in his next two films, Born On the Fourth of July (1989), as a disabled Vietnam vet alongside Tom Cruise, and The Doors (1991), as the legendary band’s producer Paul Rothchild. In between he appeared in the ensemble period comedy Bloodhounds Over Broadway (1989), Suffering Bastards (1989), and the TV movie The Tragedy of Flight 103: The Inside Story (1990).

In 1991, Wincott was cast in the Kevin Costner film Robin Hood: Prince of Thieves as Guy of Gisbourne, the evil Sheriff of Nottingham’s 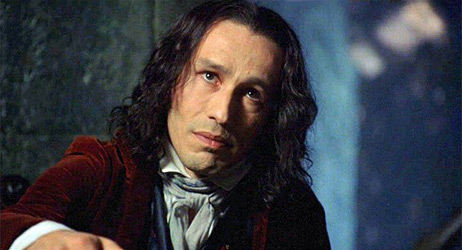 sidekick. This role would be the first in a string of high profile film villains, which would cement his career as a fine character actor.

Next up was 1492: Conquest of Paradise (1992) as a corrupt Spanish nobleman sent along with Christopher Columbus to oversee the extraction of New World fortune. In the violent Romeo Is Bleeding (1993), Wincott portrayed Sal, an enforcer for the local Mafia, and the third part of a love triangle with hapless cop Gary Oldman and femme fatale Lena Olin. In Disney’s remake of The Three Musketeers (1993), he got to play Captain Rochefort, henchman to Tim Curry’s manipulative Cardinal Richlieu.

In 1994, Wincott was cast as Top Dollar, the sadistic villain, in the comic-book adaptation of The Crow. It is a film that may have faded into the background but instead has become a cult classic, due in large part to the tragic death of its star Brandon Lee (son of Bruce Lee) while filming. Michael Wincott played Top Dollar with both elegance and viciousness, prompting a reviewer to describe him as the “vilest of villains”.

The success and profile of these five films brought Michael Wincott to the attention of more filmgoers, though most reviewers barely mentioned his solid performances, just commenting on his notable voice.

In 1996, Michael Wincott starred in his good friend Julian Schnabel’s film Basquiat, as Rene Ricard, a 1980s NYC art dealer. The following year, he appeared in Metro (1997) as the villain being hunted down by Eddie Murphy’s cop, and in the Aliens sequel, Alien: Resurrection (1997), as the villainous Captain Elgyn. He appeared in the light-hearted 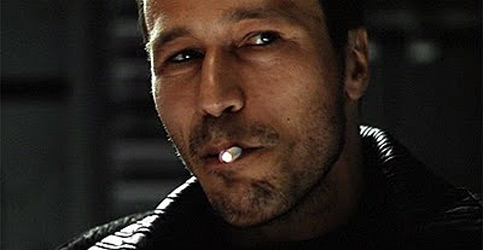 mob movie Gunshy (1998), as a mobster who just wants a friend, and in 2000, Julian Schnabel cast him as Herberto Zorrilla Ococha in his award-winning drama Before Night Falls.

After Before Night Falls, Wincott appeared opposite his good friend Morgan Freeman in Along Came A Spider (2001), as chameleon-like bad guy Gary Soneji, and then in the most recent screen adaptation of The Count of Monte Cristo (2002), as the sadistic Warden Armand Dorleac who wrongly imprisons Jim Caviezel’s Edmond Dantes. Surprisingly, it was only recently that Wincott contributed his uniquely hiss-like vocals to an animated film, as the unredeemable spider-like Scroop in Disney’s Treasure Planet (2002).

But it isn’t all movies. He continues to pursue his musical passions as well, playing the guitar on one of Julian Schnabel’s CDs, and jamming with Jesse Wood, (son of Rolling Stone Ron Wood) and members of the rock band U2.

While most filmgoers may recognize his face or voice, they probably couldn’t tell you his name, Michael Wincott has legions of fans, who follow his every career move. They berate critics for largely ignoring every solid performance he has given and they believe that Michael Wincott is one of the most under-rated talents of his generation.

This biography is Copyright © 2004 by Catherine Solmes and may not be used without prior written permission. Click here for more information about copyright.