(January 4, 2015 – Montréal, QC) – A veteran activist, a tortured artist, a modern-day Amazon: January’s film programming at this city’s Phi Centre defies conventions with a series of films and documentaries that portray bold and strong-willed women.

A tribute to contemporary heroes, the month’s selection explores the various facets of the modern woman: the one who stops at nothing to break free from the stranglehold of macho thinking, the one who dares to break the silence that has numbed an entire population, the one who looks to heal past trauma with a liberating work of art.

A Montreal premiere, this galvanizing documentary tells the story of the birth of the American feminist movement at the end of the 1960s. Directed by Mary Dore, She’s Beautiful When She’s Angry is a thought-provoking film that has a distinctive mobilizing power thanks to the indelible 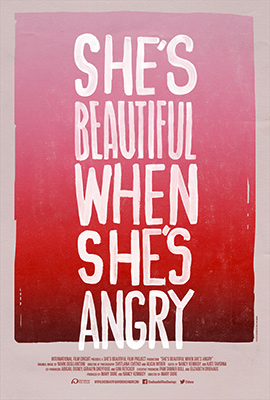 images and to the subject matter that is still relevant today. Inspiring fascination and a spirit of rebellion, the film reminds viewers of the revolutionary gains made—and never taken for granted—by the feminist cause. A long and winding journey that deserves a place in our collective memory as a project of freedom and solidarity.

Presented during the Directors’ Fortnight at the Cannes Film Festival, Nabil Ayouch’s film on Moroccan prostitution was forbidden from screening in her home country. In the heart of Marrakech, Noha, Randa, Soukaina and Hlima participate in the world’s oldest profession. Prohibited objects of desire, they suffer the repression of a society that condemns them even as it uses them. Despite the raw imagery that is, at times, almost unbearable to watch, hope persists. Starring Loubna Abidar, Asmaa Lazrak and Halima Karaouane, the Franco-Moroccan director’s controversial feature film has screened to sold-out crowds in Tunisia, the first Arab country to program it. Montreal cinephiles who missed the screening during the Festival du nouveau cinéma will have the opportunity to see it this month.

Premiering here on January 19, with subsequent screenings the following two days, the film Felt skilfully walks the line of suspense, romance and horror. Directed by Jason Banker, this true story introduces viewers to Amy Everson, a multidisciplinary artist coping with past psychological trauma. Looking for catharsis, she spends her time embodying troubling creations of alter egos that take on the male form until Kenny, a vulnerable man, tries to befriend her. The short film Edmond, an official selection of the upcoming Sundance Film Festival, will precede each screening of Felt.

The Phi Centre is an initiative of Phi and its founder, Phoebe Greenberg. Phi’s mission is to provide the public with excellence in all types of art from every possible horizon. Click here for more about January’s film program including six films that will screen as part of January’s feminist theme, as well as a chance to discover the top picks from TIFF during the 15th edition of Canada’s Top Ten Film Festival.