Home News Archive It’s a Wrap at the Female Eye

(June 25, 2016 – Toronto, ON) The 15th Female Eye Film Festival comes to a close today and while all the films on today’s schedule are worth mentioning, there are two we want to highlight. The first is a documentary by Female Eye founder, Leslie-Ann Coles. The second is the closing gala film. The festival begins at noon and there’s a link to the full schedule at the bottom of this article.

The Female Eye was born out of Coles own filmmaking experience. When we interviewed her in 2008, nearly 10 years ago, we learned that while she as on the festival circuit showing her short In the Refrigerator, she was struck by the fact that women are still in the minority when it came to directing films. “At its core, [filmmaking] is still an old boys club,” she said. “There are a lot of women working in the industry, but they have to fight like hell to get the financing to make their films.” To even the playing field, she decided to do something about it and launched the Female Eye Film Festival in 2001. “The festival is not about films for women, but by them,” she said.

This year as she guides the 15th edition of the festival, she again brings one her own films to the schedule. A film, coincidently, she was working on back when we interviewed her in 2008. It’s working title was Should Have Been There. Northernstars founder, Ralph Lucas, who also owns the production company Screenarts Incorporated, edited a very rough cut of what Coles was trying to 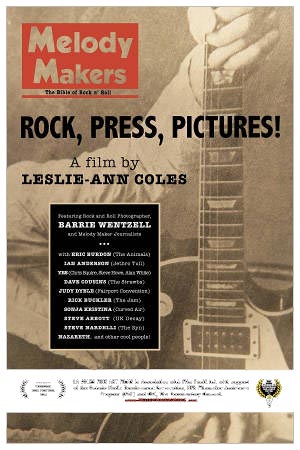 achieve way back then. In November of last year, when the finished film screened at Whistler, Lucas interviewed Coles about the film and it’s worth reading again before seeing the film.

In short, Melody Makers captures the birth of music journalism in England with the rise of what we would call from a North American perspective The British Invasion. The film is a portrait of Toronto-based photographer, Barrie Wentzell who was Chief Contributing Photographer to what most considered “the Bible” of music news in Great Britain, Melody Maker magazine from 1965 to 1975. Also appearing are such musical greats as Eric Burdon and Ian Anderson of the group Jethro Tull.

Melody Makers: Should Have Been There screens at 4:30PM today. Leslie-Ann Coles and the film’s main subject Barrie Wentzell will be there to talk about the film and answer questions following the screening.

The Closing Gala is the world-premiere screening of Can Hitler Happen Here? directed by Saskia Rifkin. In the world of cinema, where there are few leading roles for women over 50 (let alone 60), Can Hitler Happen Here? is notable simply for featuring a heroine in her 70s battling meddling neighbours, ambitious social workers, and real-estate vultures as they conspire to torment an eccentric old lady. But it’s not just her age that sets Miriam (Laura Esterman) apart in this stunning role. Far from being an elderly female archetype, Miriam offers a daring character study of a vibrant, stubborn, individualistic woman intent on holding on to her home and iconoclastic lifestyle. The unique spirit of the movie’s central protagonist comes directly from the screenwriter, Catherine May Levin, another powerful and rebellious woman in her 70s.

Click here for a preview of all the films on the Female Eye’s schedule.