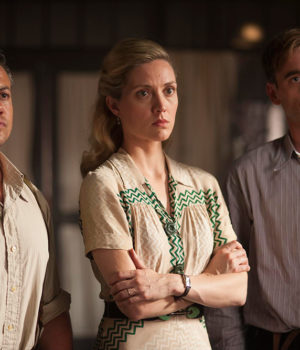 (September 8, 2016 – Toronto, ON) Fans of the CBC series X Company will be disappointed to learn this season will be the last. Taken from the pages of history, with some very liberal retelling, viewers may have to be reminded that, like in the real world, World War II did come to an end too.
Set in the thrilling and dangerous world of wartime espionage, this final season will see the first group of trained operatives from Camp X complete their final covert mission when the series returns on CBC in winter 2017. CBC and Temple Street today announced that production is underway on the third and final season.

Executive producer Stephanie Morgenstern will come full circle and make her television directorial debut with X Company’s final two episodes of the final season, 15 years after directing the award-winning short that inspired the series. “It’s been 15 years since we first wrote Remembrance,” said Mark Ellis and Morgenstern, who will co-write the final episode. “It began as a small, intimate story about one night in the life of an unusual young man, and since then has taken on a whole new life as X Company. It’s really

satisfying for us to be able to bring this series to its natural and thrilling conclusion.”

The final season of X Company will see the team of Camp X operatives press forward to the finish line of their final mission together, hoping to deliver a blow to the enemy that could change the course of the war. After the shocking and disillusioning losses of Tom and those who fell at Dieppe, it’s harder than ever to keep the faith. The rules of human decency are stretched to a point where the difference between good and evil becomes more difficult to discern. The team learns the tough lesson that to fight the enemy, you must become the enemy.

X Company is a Canadian-Hungarian co-production, produced by Temple Street, a division of Boat Rocker Studios, co-produced by Pioneer Stillking Kft and commissioned by CBC.

“Mark, Stephanie and Temple Street have done a remarkable job bringing this unique piece of history to life with an incredibly talented team of actors, writers, producers and crew,” said Sally Catto, general manager, programming, CBC Television. “Canadians have been captivated by this extraordinary story since its inception, and we look forward to bringing viewers a riveting and epic final season.”

“Mark and Stephanie are gifted storytellers who never shy away from the complexities of the human condition,” said David Fortier and Ivan Schneeberg, executive producers and co-presidents of Boat Rocker Studios. “We’re proud of them and our international cast, crew and co-producers for their work on this series, and thankful to our partners at CBC and Sony Pictures Television for their continued support on what is sure to be a compelling final chapter in the X Company story.”

Season 3 of X Company is shooting on location in Budapest, Hungary until November, 2016.