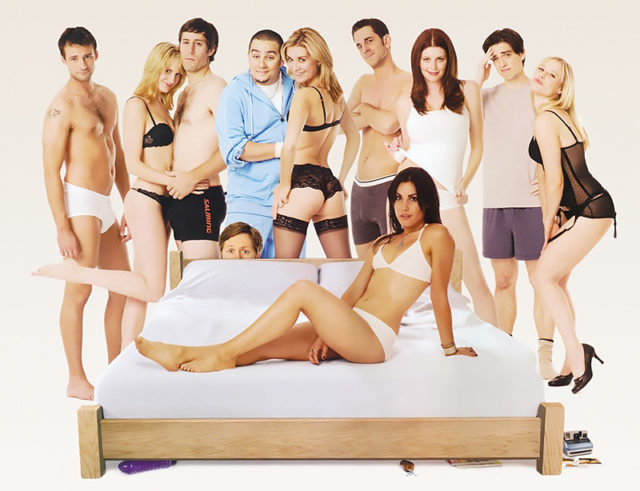 You might think Young People Fucking would burn a hole in the projector, given all the heat the film has drawn from Conservative politicians and self-righteous moralists. Few English Canadian films in recent memory have come with the attendant hype of this one, based on its title alone.

In truth, YPF is a modest, episodic low-budget sex comedy, much tamer than anything that can be found with a click of a mouse on a home computer connected to the Net, which mostly works because of a clever and witty script and some fine ensemble acting by fresh faces. The film is constructed like television sketch comedy, with five couples acting out various sexual dilemmas over the course of one night. There are The Friends (Aaron Abrams and Carly Pope), The Couple (Kristin Booth and Josh Dean), The Exes (Sonja Bennett and Josh Cooke),The First Date (Diora Baird and Callum Blue), and The Roommates (Ennis Esmer, Peter Oldring and Natalie Lisinka). The progress through the night is marked on the screen by chapters: Prelude, Foreplay, Sex, Interlude, Orgasm and Afterglow.

The Friends decide to take platonic to a new level, while The Couple experiment with sex toys, The Exes give it one last go, The First Date is between a player and a seemingly innocent young girl, and The Roommates indulge in some hilarious three-way hijinks involving Polaroids and cookie dough.

Sex, it has been said, is the great leveller in life. It is also said that it is the death of action in movies. YPF moves at a glacial pace, and despite the witty word play by director Martin Gero and his collaborator Abrams, who does double duty as one of The Friends and co-writer, there are very few surprises here. The humour is for the most part tame and nothing really does 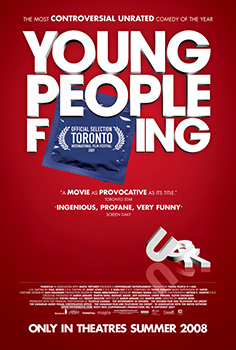 – mind the bad pun – come to a climax. Of the five sketches, The Roommates is the funniest with an off-the-wall performance by Ennis Esmer as an overly enthusiastic boyfriend of an “impossibly hot” girlfriend who is happy to share her with his puzzled roommate. Of the women, Kristin Booth stands out as The Couple with a strap-on ready to do something nasty to her bored lover. This is the second film in a row that Ms Booth (from the cast of “M.V.P.”) has given an unflinching, touching performance. She was a standout as the crackwhore in This Beautiful City.

The title of this film has come under a great deal of scrutiny and has provided a lightning rod for every right-wing zealot in this country who wants to legislate morality. Undeniably, with a controversial amendment (which would allow the Heritage Minister the right to deny funding to any film he or she finds morally offensive) to Bill C-10, the Income Tax Act, now in the Senate waiting approval (or not) that has most arts groups in the country up in arms, YPF has benefited from the controversy and generated more heat and media coverage than anyone could have been foreseen.

Personally, I think the title is too provocative, the use of the f-word upsetting to many – not all are right-wing zealots – and a very crude way of generating publicity. And it will never sell in the U.S. Nevertheless, I congratulate the producers and Gero on their good fortune, and marketing savvy. And it’s refreshing to see a Canadian sex comedy that more amuses then offends, once you get passed the title.