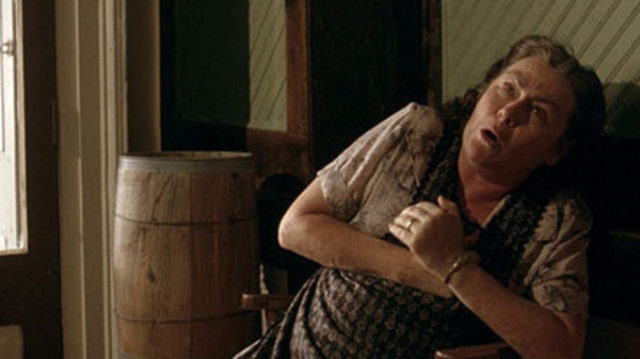 Set in 1947, Young Triffie begins when Alan Hepditch, a naïve young Newfoundland ranger (a sort of colonial police force), is sent from St. John`s to an isolated outport to investigate a sheep mutilation. But before he can get to where he is going, a young girl`s body is found washed ashore, and when he arrives, he finds himself in way over his head. As he delves into what is now a murder investigation, he finds bizarre goings on behind the quaint, painted clapboard houses.

On the surface, Young Triffie is a murder mystery straight out of Agatha Christie, with all sorts of eccentric characters, local colour and a classic ending where multiple suspects are brought together in one room. But at the hands of Mary Walsh, in her feature-film directorial debut, and her fellow screenwriters, Christian Murray and Ray Guy, a former reporter for St. John’s Evening Telegram who wrote the stage play, Young Triffie’s Been Made Away With, it becomes a biting, dark and very funny satire, more influenced by Jonathan Swift’s A Modest Proposal than anything by Christie.

The denizens of Swyers Harbour are a very odd bunch. There is Dr. and Mrs. Melrose (Rémy Girard and Andrea Martin), who originally came from Montreal to bring cultured values to the outport, but now he is a bottle-a-day alcoholic and she uses her arm as a pincushion. Aunt Millie (Walsh) is the local postmistresses and busybody, who opens all the mail and sometimes destroys it if she thinks it is inappropriate. Her son, Billy (Jonny Harris), is the prime suspect. Pastor Pottle (Andy Jones) is a raving lunatic of the fundamentalist sort who is suspected of buggering little boys in the orphanage he owns and operates, and secondary characters include Aunt Ducky Piercy (Cathy Jones) and Uncle Oral Head (Doug Ballet). 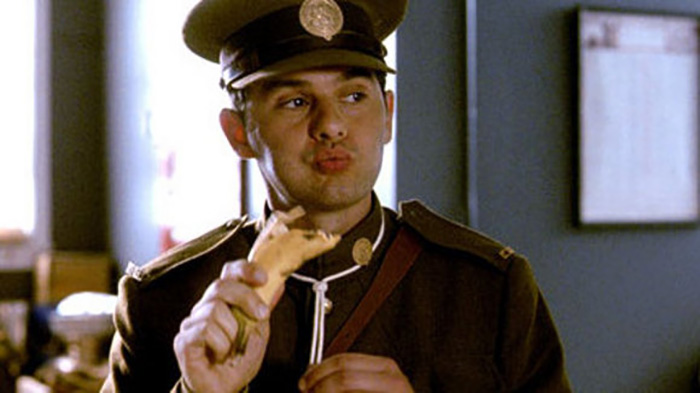 In the midst of all this madness is ranger Hepditch (Fred Ewanuick, the hapless Hank from Corner Gas), who is educated in modern forensics but faints at the sight of blood. Channelling Rowan Atkinson’s Mr. Bean, there’s not a doorframe Ewanuick does not walk into or a double take that he doesn’t take two or three times. It`s a marvelous comic creation, and a part that was not large in the original play, but is central to the movie. With all the earnest enthusiasm he can muster, Hepditch, considered 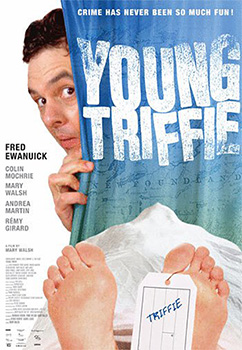 incompetent by his superior (Colin Mochrie), sets out to prove he’s up to the task of solving the strange goings on in Swyers Harbour, some of a biblical nature.

There is one particularly hilarious scene where he visits a local American military base (a leftover from the Second World War) and comes across a canteen piled high with exotic food unavailable to the locals. He picks up a banana, and not knowing what to do with it, eats it whole, with the peel on, in one take, without cuts.

Young Triffie is a throw back to the good old days when CODCO was the funniest, most wicked satire to be found on Canadian television. With the core of the original troupe in place – Walsh, Andy and Cathy Jones – there is no subject off limits. Incest, buggery, alcoholism, drug addiction, religion are all fair game in this, one of the most outrageous and funniest Canadian films ever made. A must see.

Photos and poster courtesy of TVA Films. Used with permission.

Wyndham Wise is the former publisher and editor-in-chief of Take One: Film in Canada. He was Contributing Editor with Northernstars.ca when this review was published.

The Journals of Knud Rasmussen

The Journals of Knud Rasmussen – Review

Stone of Destiny – A Review

Away From Her – Review