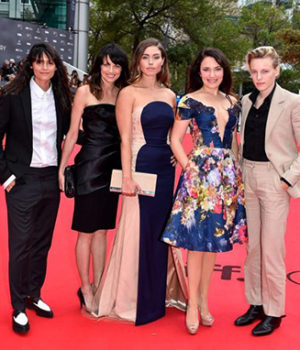 (September 25, 2015 – Toronto, ON) Principal photography began yesterday begins on Below Her Mouth​, the story of an unexpected affair that quickly escalates into a heart-stopping reality for two women whose passionate connection changes their lives forever.

This contemporary love story, written by Stephanie Fabrizi and directed by April Mullen (88, Dead Before Dawn) stars Canadian actress, Natalie Krill and Swedish model, Erika Linder. In Linder’s first-ever photo shoot, she posed — convincingly — as a young Leonardo DiCaprio circa his film The Basketball Diaries. That marked the start of a versatile career path for Linder, who in her own words, has “too much imagination to be just one gender.” Linder’s intriguing androgynous look has landed her a Tom Ford campaign and spreads in Vogue Italia, Elle US and Marie Claire. She has starred in music videos for Katy Perry and Of Monsters and Men.

Before her acting career, Saskatchewan native Natalie Krill was a dancer with the Royal Academy of Dance for 12 years and studied with the Alberta Ballet. Her recent feature film roles include Atom Egoyan’s Remember, Casino Jack, Hollywoodland and guest appearances on television series Orphan Black, Remedy, The Listener and Rookie Blue.

Below Her Mouth is a Serendipity Point Films production in association with Distant Horizon.