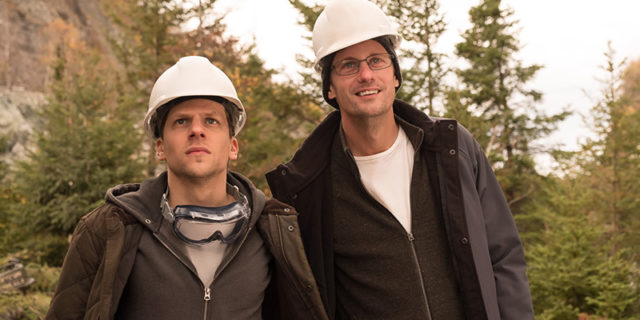 Canadian Film of the Day: September 8
by Staff

(September 8, 2018 – Toronto, ON) Kim Nguyen is one of Canada’s most successful filmmakers and his projects are carefully crafted stories that often leave audiences breathless in their beauty of their ruthlessness. His film Rebelle (aka War Witch) was given the World Narrative Award at Tribeca in April of 2012. It also won 10 of the inaugural Canadian Screen Awards and 8 Jutra Awards in March of 2013, taking Best Picture, Best Director and Best Screenplay at both. His Two Lovers and a Bear was selected to be part of the Directors’ Fortnight at the 2016 Cannes Film Festival.

He returns to the large screen with The Hummingbird Project, which is our pick for the Canadian film of the day. The Hummingbird Project was selected for a Special Presentation at the 2018 Toronto International Film Festival where it will have its World Premiere at 3:00PM today at the Visa Screening Room at the Princess of Wales Theatre.

In this epic tale of humanity versus corporate greed, Nguyen exposes the ruthless edge of our increasingly digital world. Cousins from New York, Vincent (Jesse Eisenberg) and Anton (Alexander Skarsgård) are players in the high-stakes game of High Frequency Trading, where winning is measured in milliseconds. Their dream? To build a fibre-optic cable in a straight line between Kansas and New Jersey, making them millions.

But nothing is straightforward for this awed pair. Anton is the brains, Vincent is the hustler, and together they push each other and everyone around them to breaking point on their quixotic adventure. Breathing down their necks is their old boss Eva Torres, a sociopathic trader who will stop at nothing to see them fail.

No matter what the cost, Vincent and Anton are determined to cut through America, only to find redemption at the end of their line, not through money, but through family and reconnecting to the land.

Click here to see the cast & crew of The Hummingbird Project.

Click here for information about The Hummingbird Projecty at TIFF>

Michèle Cournoyer – A Look Back