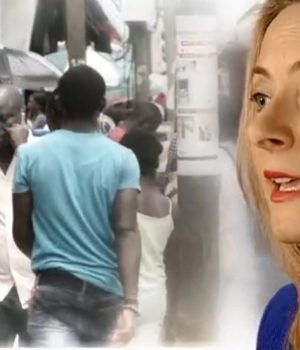 (September 29, 2015 – Toronto, ON) The CBC News program The National has won the 2015 International Emmy® Award in the News category for their coverage of the Ebola outbreak in West Africa.

In the fall of 2014, the deadly Ebola virus was sweeping through West Africa and a tide of fear was spreading around the world. The National sent correspondent Adrienne Arsenault, producer Stephanie Jenzer, and videographer/editor Jean Francois-Bisson to the overwhelmed capital of Liberia to report on what was happening on the ground. In a series of daily reports titled The Ebola Effect, they introduced viewers to the tiny orphans who had survived but lost everything, the overwhelmed aid workers, and the president of a country where the simple touch of a hand had become a memory.

“It was a year ago exactly we were on the ground in Liberia and we three are still struck by how much people there endured both physically and emotionally,” said Arsenault, pictured. “I don’t think that story will ever leave us. And neither will this honour tonight.”

“As the only Canadian news organization to report from Liberia during the fall of 2014, The National’s coverage of the Ebola crisis is testament to the dedication of Adrienne Arsenault and the team,” said Jennifer McGuire, general manager and editor in chief, CBC News and Centres. “This award speaks to the lengths that CBC News investigative teams are willing to go to ensure that we continue to offer Canadians in-depth coverage on important stories from around the world.”

Other nominees in the News category were from India, Netherlands, and Brazil. International winners were recognized alongside their American news and documentary peers.

Girls’ Night Out on CBC