(June 22, 2017 – Toronto, ON) As a nation we are often hard on ourselves for not paying enough attention to who we are, what we’ve done, where we came from and where we’re going. Our work here at Northernstars is but a small part of that effort to celebrate all things Canadian and there’s nothing we like doing more than shining a light on other efforts that help us learn more about ourselves. Today that spotlight is on the CBC, always a reliable source of Canadian stories, and their series Extraordinary Canadians.

The celebrated series of biographical portraits pairs Canada’s most distinguished writers with great Canadians and there are three new episodes that will be broadcast during Canada Day week on CBC on June 28 and June 29 at 8:30pm (9 NT) and on Canada Day, July 1 at 6:30pm ET (3:30 PT).

Extraordinary Canadians is an innovative biography series that takes a decided point of view on the lives of eminent Canadians from the perspective of celebrated writers who have themselves shaped contemporary thinking. Produced by PMA Productions, the series is adapted from the best-selling Penguin Random House Canada book series of the same name, edited by John Ralston Saul.

“This remarkable series has been a decade in the making – from the first seed of the idea to now,” said Kenneth Hirsch, Producer, PMA Productions. “There has been nothing quite like it before – a collection of biographies conceived simultaneously for books, television, print, and digital media. It has been an incredible experience teaming up with Random House Penguin, John Ralston Saul, Canada’s best writers and the country’s most creative filmmakers to craft an innovative television series that will remain relevant for years to come. I am thrilled to present more episodes of this dramatic and engaging take on our recent history, to Canadians across the country.”

In detail, these three episodes are:

DR. VINCENT LAM ON TOMMY DOUGLAS
Preacher, boxer and devout social activist, Tommy Douglas is lauded for establishing many social programs that have come to define Canada, most notably, the universal 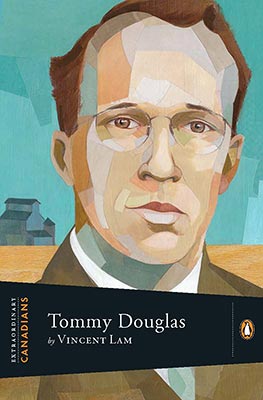 healthcare system. Vincent Lam brings his unique spin to the world of Tommy Douglas from the eyes of a medical doctor working within the system Tommy established. This episode was directed by Adrian Wills. Dr. Vincent Lam on Tommy Douglas airs Wednesday, June 28 – 8:30pm (9 NT). Wills is a graduate of the Canadian Film Center. His newest venture is as co-creator, executive producer and additional director of the eight episode prime time television drama series 21 Thunder, a gritty, no-holds barred look at under 21 soccer, fusing both the sports and crime genre for CBC television.

Both of the following episodes were directed by Karen Cho, a Chinese-Canadian filmmaker known for her socially-engaged documentaries. She directed the award-winning In the Shadow of Gold Mountain (2004) a documentary about the Chinese Head Tax and Exclusion Act and the Gemini-Nominated Seeking Refuge (Terre d’asile) (2009) a film following asylum seekers in Canada. Her film Status Quo? The Unfinished Business of Feminism in Canada (2012) won Best Documentary at the Whistler Film Festival and screened in over 67 community events across Canada.

DANIEL POLIQUIN ON RENÉ LÉVESQUE
As the founder and leader of the Party Quebecois, René Lévesque made an instrumental contribution to the Quebec and Canadian identity: egalitarian, inclusive and fair. Translator, political essayist and author Daniel Poliquin, a great admirer of Lévesque, while critical of some of his ideas, believes Lévesque’s successes have made Quebec and Canada a better place. Daniel Poulin on René Lévesque airs Thursday, June 29 – 8:30pm (9 NT):

ANDRÉ PRATTE ON SIR WILFRED LAURIER
Wilfrid Laurier governed Canada at a pivotal time in our history and was the calm center of many political storms. The first French Canadian Prime Minister, Laurier was the pioneer of Canadian nationalism, helped create peaceful co-existence between French and English Canadians, through compromise and patience. André Pratt is a political writer, journalist and federalist thinker; he brings Laurier’s forgotten ideas into focus and demonstrates how they laid the foundations for modern Canada. André Pratte on Sir Wilfred Laurier airs onCanada Day, July 1 – 6:30pm ET (3:30 PT):

Unique among television biography series, Extraordinary Canadians captures the relationship between writer and subject that lies at the heart of the biography process, and probes the distinctive link between the two. Each episode presents insights into the lives of both biographer and subject, as each writer chronicles the life of a great Canadian from whom they have themselves drawn inspiration.

Headquartered in Montreal, PMA Productions Inc. was founded in 2004 by Kenneth Hirsch, and has since gained an international reputation for the production of prestigious film, television, and digital media content. Its first scripted series, 21 Thunder, an 8×1-hour serial drama for television, debuts this summer on CBC and will be made available internationally through Content, a Kew Media Company.