(November 4, 2020 – Toronto, ON) When the 23rd annual Cinéfranco festival of International and Canadian Francophone cinema launches on November 20, it will be online and for the first time, national. Running until November 28, the festival has selected 17 features and two programs of short films. Using the Eventine festival platform, in addition to the filmed content Cinéfranco online will also carry post-screening conversations and panels.

The feature films come from Belgium, Canada, France, Lebanon, Morocco, and Senegal reflecting the diversity of the Francophone world.  As always filmmakers from Ontario, Quebec and New Brunswick are well represented with the return of the popular Courts toujours (In Short) programs. Two new films will be added to the schedule each day with a 48 hour window for a household to view their selections once a stream is activated. Closing Night on November 28 will see three new films on the platform.

“In a year to remember, full of challenges for everyone, we at Cinéfranco are blessed and privileged to be able to continue bringing the best of International and Canadian francophone cinema to our audiences”,  said Marcelle Lean, Artistic Director and Founder. “During the pandemic we’ve stayed in touch with our community online, presenting films and conversations and are looking forward to embracing new audiences across Canada during the festival. The pandemic has given us all reason to pause and reflect as well as witness amplified inequities. We’ve curated this year’s film selection with that, as well as a need for some levity, in mind.” 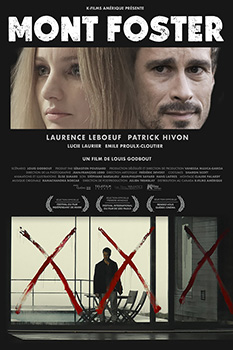 Opening night’s double bill is a mixture of light and dark – a French comedy and Québecois psychological thriller with Méliane Marcaggi’s Belle Fille (The Morning After) and Québec director Louis Godbout’s Mont Foster, a psychological thriller in which Chloe (Laurence Leboeuf) and Matthieu (Patrick Hivon) retreat to their country house to reconnect as Chloe’s fragile mental state deteriorates. Meliane Marcaggi’s Belle Fille is all about mistaken identity, which propels this 2020 comedy. When Louise (Alexandra Lamy) escapes her cheating husband in Corsica for a wild night of passion with a man who ends up dead, she’s mistaken for his secret long-time girlfriend by his fearsome and loving mother played by Miou-Miou.

Closing Night’s Nadia, Butterfly stars real-life Olympian Katerine Savard as Nadia, who decides to retire from pro swimming after the Tokyo 2020 Olympic Games to escape a rigid life of sacrifice. Quebecois director Pascal Plante, himself an award-winning swimmer brings empathy and understanding to this coming of age story of a young woman’s quest to find her identity outside of sport.

There is more information online and E-Tickets are available to purchase up to November 28 at 11:59pm from Cinéfranco.