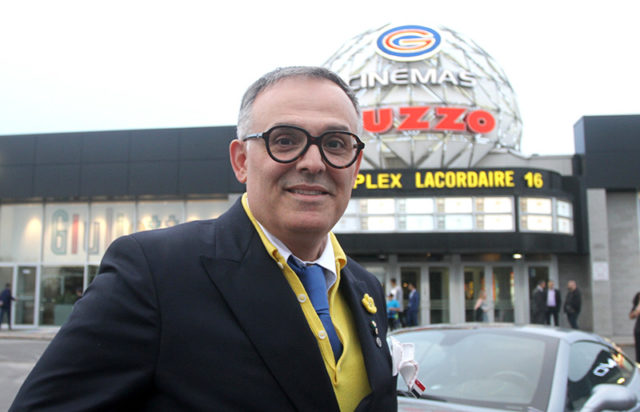 Curtain Up for Vince Guzzo

(November 23, 2018 – Toronto, ON) In the age of online streaming services like Netflix, Prime or Crave, there are persistent rumours about the tough times for cinema chains. In March of last year for example, Variety opened an article on the subject with this sentence: “Anyone in the movie business who tells you they’re not scared stiff about the future is probably lying.” So, any news of expansion in the film exhibition business has to be accepted as good news.

To be fair, we should point out that in 2017, revenues for movie house owners in Canada and the United States reached a rather impressive US$11.1 billion. Taking that as a glass of water being more than half full, Vince Guzzo (pictured above), the President and CEO of Guzzo Cinemas and the newest Dragon on CBC’s Dragons’ Den, has announced he’s actively exploring the expansion of his namesake company beyond his home province of Quebec. More specifically he’s looking into other markets including major Canadian business hubs like Vancouver and Calgary.

“I look forward to establishing new synergies and capitalizing on opportunities from coast-to-coast that make sense given my current business portfolio,” said Guzzo. “Quebecers are already familiar with the exceptional consumer experience associated with Guzzo Cinemas and my other businesses, and I’d like to share that dedication to strong customer service and top-quality products with the rest of Canada.”

In addition to owning and operating Guzzo Cinemas, the largest chain of independent theatres in Quebec, the Montreal-based entrepreneur runs a chain of fine dining restaurants and a thriving construction company. In 2007 he and his wife, Maria, established the Guzzo Foundation to centralize their philanthropic endeavours, through which they have raised millions of dollars to support medical research aimed at the prevention of cancer and the support of mental health initiatives. He recently joined CBC’s Dragons’ Den as its newest judge for the program’s 13th season.

“My movie theatres are gearing up for a bustling holiday season,” said Guzzo, “and I’m looking for ways to increase the number of satisfied moviegoers across Canada. Tapping into new markets and leveraging underserved customer bases will do wonders for my businesses in the long run, while also giving Canadians greater access to entertainment.”

Regular readers know Northernstars is committed to promoting Canadian film and we asked Mr. Guzzo if he would devote more screen time to Canadian features than other chains? He responded, “As a Canadian establishment, we are always happy to feature content produced here at home. That being said, consumer demand drives our business so any decisions around what movies play in Guzzo Cinemas are ultimately driven by them.”

More screens equals more opportunity for Canadian filmmakers and distributors and we look forward to hearing more about Guzzo Cinemas in 2019.