Drifting Snow in the Forecast
by Ralph Lucas – Publisher

(April 22, 2021 – Toronto, ON) It snowed in Toronto yesterday. Not enough to cause any drifting snow, but also yesterday we began working on a page for a new film titled Drifting Snow. It could be subtitled The Return of Sonja Smits.

While Smits has appeared in the occasional TV series episode, her last big screen role was in 2006 in something titled One Way. She is perhaps best known for her Gemini Award-winning work on the series, Street Legal (1986-1992) and she was the 2004 recipient of ACTRA Toronto’s Award of Excellence. In Drifting Snow she plays a character named Joanne (pictured above). Her husband John (Colin Mochrie) died a year ago and Joanne now faces the rituals of remote rural life on her own. The setting in this beautifully shot film is Prince Edward County, east of Toronto where both Smits and the award-winning documentary filmmaker Ryan Noth reside. Shot in 2019, cinematographer and co-producer Tess Girard (As the Crow Flies) captures the county’s winter landscape beautifully, establishing it as a character in its own right. 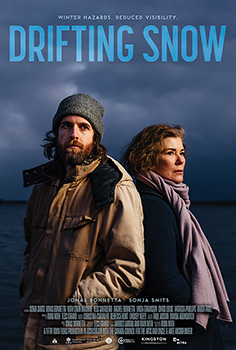 In a media release, Noth said, “Over a decade ago I retreated from Toronto for a more rural lifestyle in Prince Edward County, and was welcomed in by a community of artists, environmentalists and farmers. My new found isolation and the time I spent exploring country roads and commuting back to the city on the highway became the inspiration for this film; using the idea of moving through the landscape as a trigger for unlocking memories.”

Noth examines loss, isolation and friendship in this story of parallel journeys that suddenly cross paths. Joanne meets a very much younger man, Chris (Jonas Bonnetta), who is an aspiring filmmaker trying to cope with failing eyesight and is dealing with his own loss, the death of his mother. Following a nighttime car accident Joanna and Chris set out on a road trip together. Despite the close quarters, the trip provides enough distance in time and space to allow their individual memories to reveal similar, parallel experiences, helping each of them shift the focus of their destination and to get a glimpse of the future.

We’re still building some pages for cast and crew members not already on Northernstars, a daily task, but Drifting Snow will open soon and it is a shame in many ways that it won’t get a big screen release thanks to the ongoing COVID-19 pandemic. Despite the small cast and intimate story this feature deserves a huge canvas and hopefully when things return to normal that might happen, although the chances of that are slim to nonexistent. Of special note, Jonas Bonnetta is a singer and composer and is making his film debut. He has appeared in a number of music videos and he also composed the music for this film. Also look for Jess Salgueiro (Mouthpiece) and Rachel Bonnetta.

You can watch the trailer online on Northernstars and the film will be available on iTunes Canada, Apple TV and Vimeo On Demand beginning May 11.