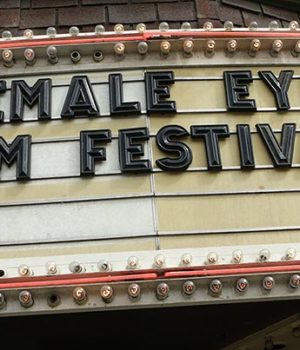 (June 24, 2017 – Toronto, ON) The 15th Female Eye Film Festival wraps tomorrow and there’s a very full schedule of films and events scheduled for these last two days. There are 6 film programs today, the first starting at 10AM and the last starting at 10:30PM. It’s a bit of a mixed bag ranging from a provocative documentary Little Stones by Emmy Award–winning filmmaker Sophia Kruz, to the remarkable award-winning Canadian animated feature Window Horses with the festival’s Honorary Director Ann Marie Fleming in attendance, to the Late Night Thrills and Chills program which helps illustrate that it doesn’t matter what the genre or subject matter, women directors can hold their own behind the camera. Fleming’s film is 1 of 2 on today’s schedule.

There’s also a full day of off-screen events which are free and open to the public and which take place at the Beach United Church at 140 Wineva Ave, about an 8-minute walk from the Fox Theatre where the festival’s screenings take place. The first, the Script Reading Series, kicks off at 10AM and runs until 2PM when members of ACTRA will read three screenplays. The first two scripts are dramas and the last is a Family Comedy/Drama. It’s a great opportunity for the filmmakers to get a sense of how their story flows and whether or not the words ring true and it’s also a great way for filmgoers to learn a little about how films get made while listening to some pretty interesting stories. Click here for more information about this program.

One of the other off-screen events is a Best in the Biz tribute to the festival’s Honorary Director, Ann Marie Fleming. Fleming is a Eurasian-Canadian filmmaker, animator, and writer. Internationally acclaimed for her genre-

spanning work in the media arts, Fleming has two of her features screening today. As previously mentioned, her multiple-award-winning animated Window Horses screens at 12:30 and then at 8:30 this evening it’s The French Guy, which won Best Canadian Feature at FeFF in 2010. Other credits include the experimental film You Take Care Now, which was selected for Canada’s Top 150 list, and her animated documentary The Magical Life of Long Tack Sam was adapted into a graphic novel that won the Doug Wright Best Book Award for Canadian Cartooning. Moderated by Carol Whiteman, President & CEO Creative Women Workshops Association, WIDC Program, this extended Q&A is a chance to learn more about one of Canada’s best filmmakers and it conveniently takes place between the screenings of her films so you can take in both as well as get to meet the filmmaker. This Best in the Biz event is scheduled for 4PM–5:30PM at the Beach United Church.

Click here for a preview of all the films on the Female Eye’s schedule.