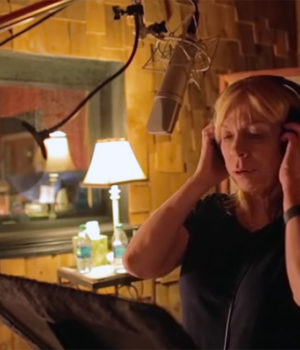 (December 2, 2015 – Toronto, Ontario) – That’s Harvey as in director and photographer Gail Harvey and that’s Rickie Lee as in Rickie Lee Jones, the jazz-pop-rock singer who burst on the scene with her top-selling eponymous album in 1979. Thirty-six years later Jones was heading into the studio in 2015 to cut her sixteenth album for her own label when Gail Harvey began to focus on the 61-year-old singer-songwriter-producer.

Titled Rickie Lee Jones: The Other Side of Desire, which is also the title of Jones’ record, the 70-minute documentary had its international debut at the 2015 Raindance Film Festival in London, England. It will tour the festival circuit prior to its iTunes release in 2016 but will screen at a special one-night only red carpet event in Toronto at the TIFF Bell Lightbox on Thursday, December 10th. In addition to the film, the two-time Grammy award-winning Jones will attend this special screening and be on stage with the film’s director to participate in a Q&A session.

“As brilliant and honest and brave as Rickie Lee Jones herself, Gail Harvey’s film is a shimmering look at how creativity knows no gender or age,” wrote New York Times bestselling author Caroline Leavitt. “Early celebrity has a cost, and that the difficult struggle to make peace with all of that can be transformed into making blazingly original art. Filled with music and insight, this documentary is just enthralling.”

Rickie Lee Jones: The Other Side of Desire, is a rare and sometimes brutally honest look at the poet-musician and rock star. Through extensive and intimate interviews, the documentary follows Jones as she makes her first album of original music in over a decade. The results is a story about an exceptional, outspoken woman and musician. Jones paints an intimate picture of her career in the spotlight, as she reflects on aging, morality, and the ups and downs of the amazing life she’s lived.

Tickets to the one-time screening of the film are open to the public and can be purchased online.