Back in the summer of 1995, Boston–based film critic Gerald Peary wrote in Take One: “Let’s give her credit, the babe–of–babes, the wet dream queen, frisky, dark–eyed, luscious–lipped Carole Laure. From La Mort d’un bûcheron (1973) through L’Ange et la femme (1977), she and her talented director, Gilles Carle, were the soft–X Deitrich/Sternberg of French–speaking Canada. To this day, nobody in a Canadian film has thrown off her clothes with the abandon of the beautiful Ms. Laure.”

Peary’s breathless article, “Babes in Boyland” (Take One Vol. 3 No. 8), was a whimsical homage to Laure and a tiny group of Canadian film actresses who could ignite the screen with beauty and sexual energy, but, of course, Laure, spectacularly blessed with the quality Billy Wilder called “movie flesh,” never got stuck in the realm of mere babedom. Her work with Carle, all raw emotion and basic instinct, led to roles in films like Bertrand Blier’s Oscar–nominated Préparez vos mouchoirs (1977). During the 1980s, Laure reinvented herself as a singer and in 2001 she debuted as a movie director with Les Fils de Marie, a melancholic exploration of bereavement.

Co–scripted with Pascal Arnold and screened in the Cannes 2002 Critics’ Week, Les Fils de Marie is about a woman (played by Laure), who loses her husband and son in a car crash. Like the Juliette Binoche character in Krzysztof Kieslowski’s Three Colours: Blue, Marie is overwhelmed by grief. Like many Kieslowski characters, she responds to her despair in an unusual way, seeking a replacement son via a newspaper ad that reads: “Mother who has lost a son seeks a son who has lost a mother.” Laure’s follow–up to Les Fils de Marie, 2004’s CQ2 (Seek You Too), also played the Critics’ Week at the Cannes Film Festival, screened at TIFF, and has been released in France and Quebec. Quentin Tarantino, the Cannes jury president, made a point of catching the movie, TIFF audiences greeted Laure warmly at her Q & A, and critics like Time’s Richard Corliss are fans. 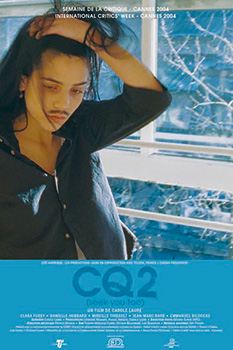 A rebel–with–a–cause story, CQ2’s protagonist is Rachel, an unsettled 17–year–old whose story arc takes her from smoldering rage to an exorcism of the dark forces threatening to destroy her. In the movie’s tense, sometimes overly frenetic opening act, Rachel walks out of her disastrous home situation and hits the streets. Boiling with restless energy, her need to stay in motion is the girl’s main sign of life in a dreary existence of smalltime drug dealing and hanging out. Somewhat incomprehensibly at first, she likes to plant herself on a chilly park bench in East End Montreal staring at the walls of a women’s prison. The weather throughout this movie, both climatic and emotional, is cold and bleak. The main source of light and warmth is Jeanne, a sinewy, stunningly leonine woman.

Jeanne enters Laure’s story as a convict on the other side of the prison walls. In a lateral traveling shot of various prisoners, each trying in her own way to survive incarceration, the camera picks her up. Although she is behind bars, Jeanne’s face is focused and determined as she works out her muscular body to some private choreography. It turns out that the lushly dreadlocked prison inmate is a dancer and choreographer. On the day Jeanne is released, Rachel’s radar picks up her signal and she follows the powerful–looking woman striding away from the prison. Perhaps Rachel has just beamed into a new destiny, and maybe she sees in Jeanne a replacement mother. She has nothing but contempt for her real mother, who goes blank when her predatory live–in boyfriend molests her. 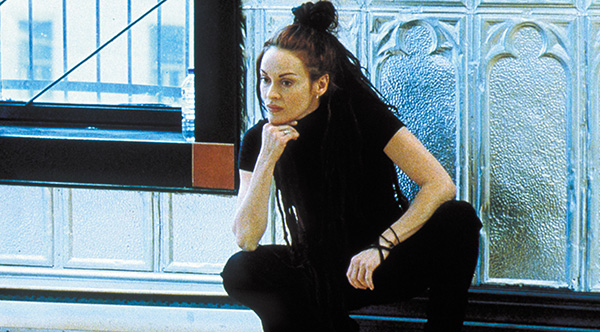 Despite CQ2’s gloomy premise, Laure’s film is ultimately a tale of redemption, although one that does not trade in feel–good sentimentality. As the movie progresses, Jeanne guides Rachel into a world where maddening emotional turmoil transforms into the beauty of movement. As Rachel studies dance and eventually begins to perform, the unleashed creativity brings her freedom, harmony and, in the picture’s finale, her first tender sexual experience. The scene, played out between Rachel and her dance partner, is an extension of a performance they just completed. It implies a fusion of the professional and personal that will be a source of strength in the future.

While Rachel is the protagonist of CQ2, Jeanne (a powerful acting debut by dancer and contortionist Danielle Hubbard) is the movie’s soul. Not only does she rescue Rachel from her teenage wasteland, she also shows an unhappy, seriously overweight woman called Odile (Mireille Thibault) how to liberate herself through dance. But she has her own problems, including an urgent need to have a baby and unresolved relationships with two ex–lovers: Steve (Jean–Marc Barr), whose Laurentian mountain inn becomes a sanctuary for the characters, and a wheelchair–bound religious nut (Emmanuel Bilodeau) who stalks Jeanne and might be necessary for a plotpoint at the conculsion of the film, but is one subplot too many.

Dance is not just a themematic device in CQ2. Once Rachel commits herself to her passion, her emotional and spiritual growth plays out through the film’s many choreographed sequences. For much of the picture, Laure succeeds in seamlessly merging drama with the kind of urban, post–punk dance forms that have fascinated her ever since she began filming music videos with Montreal choreographer Édouard Lock and his star dancer, Louise Lecavalier. Lock’s internationally renowned La La La Human Steps “use the gestures of life a lot,” Laure told me during an interview at TIFF. “They go with the cities, the body language of today. And there’s a lot of room for interpretation.” Lock, the stunningly lithe Lecavalier and numerous other performers have developed a psychodramatic dance performance style in synch with music ranging from techno to rock and roll. It’s a staccato language of enigmatic hand gestures, flailing arms, touching oneself, herky–jerky starts and stops, plunging into space, crashing, spinning, jumping back up. “I’ve lost control,” the dancers seem to say with their bodies, “but I’m trying to get it back.”

Carole Laure wrote the character of Rachel for her daughter, Clara Furey, a real–life dancer acting for the first time. Naturally, Furey’s dark–eyed, lissome beauty reminds many people of her mother at age 20. When I met Laure in a hotel bar, she wore a forest green sweater, shades and percolated with the sensual energy familiar from all her past movies. She was winding down her TIFF press schedule before flying to Paris, where she lives part of the year (the other part in Montreal) with her compagne, musician/writer/director/actor Lewis Furey. Their relationship ignited 25 years ago when they acted together in Giles Carle’s strange and critically–panned fable, L’Ange et la Femme.

Aware of the widespread comparisons between herself and her daughter, Laure told me, “Clara approaches acting very differently from me. When I was 20 years old, I was trying to seduce. I tried to be pretty, I tried to be nice. Her, not at all. She’s completely raw. She’s naked when she plays. She doesn’t care about being beautiful, about not being beautiful. She doesn’t think about it, which is very rare for a 20–year–old girl.”

Laure recalled that while shooting a nasty confrontation between Rachel and her fictional mother, “It was like a documentary. I followed her with the camera, and she was almost like an animal in her cage.” But did Laure ever feel conflicting emotions guiding Clara through emotionally volatile scenes, not to mention a disturbingly vivid gang rape? Although the director “was scared at the beginning,” the discipline Furey has learned as a dancer is tougher than the average actress’ control. Moreover, “On the set people thought we were mother/daughter, but in fact I direct everybody. There was not a special relationship with her. It was not mother/daughter. It was director/actress.”

Laure explained that CQ2 originated with images of her various characters in motion. The preoccupation with movement, body language and sexuality led her to focus her story on adolescence, a period of rapid change and self–invention. But Laure was equally intrigued by her adult characters. Jeanne, for sure, but also Odile, the rotund housewife whose public breakdown lands her in jail. Paralleling Rachel’s dance–inspired movement from chaos to harmony, Odile comes to terms with her life. 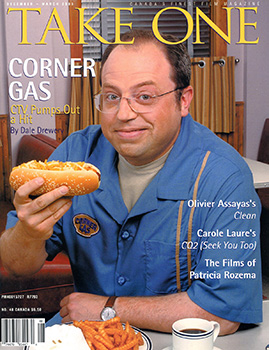 Laure, fed up with the Cosmo dictum that “beauty brings happiness and a really nice sex life,” decided to climax the Odile subplot with an unusually frank scene depicting the woman having perfect sex with her husband. “Marie Thibault said, ‘Oh, nobody ever offers a real love scene to a fat lady. They always make fun of it.’ I hate that. Mireille has a lover in real life, and she’s happy with him. What I love about that scene is that she’s there with her big nightgown. She’s like a princess ready to make love.” Laure acknowledges that her earthy approach to moviemaking, and life, was influenced by her onetime director and lover, Gilles Carle. “Gilles was my master,” she recalled. “When I was young, he was my school. He was my teacher of desire. He’s a great teacher of desire. I learned everything from him.” Carle, now afflicted with Parkinson’s disease, taught her technique and how to “write sincerely and not censor myself.”

As for the future, despite recent Quebec hits such as Seducing Doctor Lewis, “I don’t write comedy. I wouldn’t be able to write four pages.” And despite her fondness for genre pictures like Collateral, Laure can’t imagine herself writing and directing one. She envisions herself digging deeper into emotionally violent drama but always with “a feeling of beauty that repairs bad things. I want that.” In CQ2, “that last, vulnerable scene of Clara making love with this guy” is like the scene that ends Les Fils de Marie. Both characters will survive. “I like that. If you don’t propose that today, what the hell?”

Also see: The cast and crew of CQ2 (Seek You Too).
Also see: Carole Laure’s filmography.

Maurie Alioff wrote this article when he was an associate editor at Take One magazine. It was published in issue 48. Northernstars acquired the digital archives of Take One in 2007. Alioff is a film journalist, critic, screenwriter and media columnist. He has written for radio and television and taught screenwriting at Montreal’s Vanier College. A former editor for Cinema Canada and Take One, as well as other magazines, he is affiliated with the Quebec media industry publication, CTVM.Info. His articles have appeared in various publications, including Canadian Cinematographer, POV Magazine, and The New York Times. He is a regular contributor to Northernstars.ca.