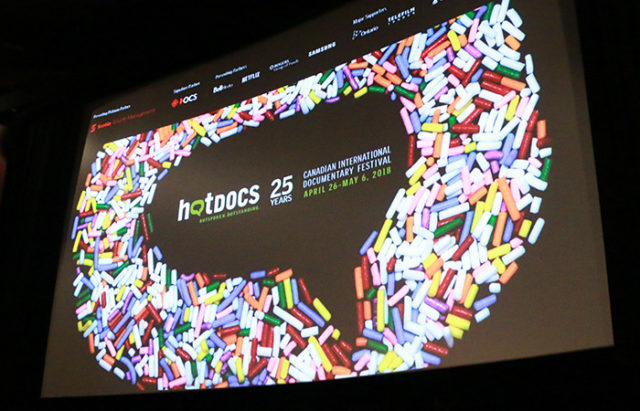 (March 20, 2018 – Toronto, ON) – When the 2018 Hot Docs Canadian International Documentary Festival kicks off on April 26th, it will be the start of an annual Spring tradition in Toronto and it will mark the 25th anniversary of a festival that began as a simple idea and has grown to become North America’s largest documentary festival. A quick look at the numbers indicates a strong documentary industry as this year’s slate of films was gleaned from 3059 submissions, resulting in a schedule of 246 films and 16 interdisciplinary projects from 56 countries in 14 screening programs. Organizers can be justifiably proud of the announcement that female filmmakers represent 50 per cent of the 2018 program.

“Formidable filmmakers, in unrelenting pursuit of the truth are a hallmark of this year’s Hot Docs Festival programming, and Toronto audiences have the chance to

explore stories from around the world, and engage with the people who tell them,” said Shane Smith, director of programming for Hot Docs. “As we celebrate 25 years of Hot Docs, it’s exciting to see that documentary storytelling is as outstanding and outspoken as ever, a vital cultural force in connecting us to our world and to each other.”

For the Festival’s 25th anniversary, Hot Docs will thank Toronto audiences by inviting them to a free world premiere IMAX screening at the Ontario Place Cinesphere of The Trolley, which takes viewers through 34 cities around the world to rediscover the public transit invention that revolutionized urban life. Additionally, Hot Docs will also present 25th anniversary screenings of Chris Hegedus and D A Pennebaker’s The War Room and Alanis Obomsawin’s Kanehsatake: 270 Years of Resistance, at which the directors will be present for post-screening discussions.


The opening gala screening will come from the Festival’s Special Presentations program. It is the world premiere of Maya Gallus’ The Heat: A Kitchen (R)evolution, a glimpse into the kitchens of the world’s top female chefs. The director, no stranger to Hot Docs, was on hand to talk briefly about her new film. Other notable films in the Special Presentations program include: Active Measures, a deep-dive into Russia’s alleged involvement in the 2016 US presidential election; Andy Irons: Kissed By God, which profiles the legendary surfing champion and his struggles with mental illness; Behind the Curve, which looks at the rise of flat Earth believers; The Bill Murray Stories: Life Lessons Learned From a Mythical Man, which goes in search of true stories of the famous actor popping up in random scenarios; The Blue Wall, a film that recounts the police killing of unarmed Black teenager in Chicago; and Love, Gilda, a touching biopic of beloved actor and comedian Gilda Radner.

In addition to the Special Presentations program, there are a 11 other different programs at Hot Docs. Following are details on all of them:

This year’s expanded DocX program, an interdisciplinary section of the Festival celebrating documentary work that lives outside of the traditional format, will feature virtual reality and interactive experiences, including: Anote’s Ark (VR) and a special photo exhibit of Kiribati; Greenland Melting, a story of climate change told through dazzling 360° perspectives; The Guardians of the Forest, following the Indigenous volunteer force striving to save the Amazon, Holy City VR, an innovative experience that lets you walk within the walls of Jerusalem; and more. Free DocX programming will be available at Autodesk @ MaRS with a satellite location at Brookfield Place. The program will also feature a one-night-only performance of Toronto filmmaker Kelly O’Brien’s Postings From Home, and the video installation Havarie, presented by the Goethe-Institut Toronto in partnership with Hot Docs, Images Festival and Scotiabank CONTACT Photography Festival.

In the competitive Canadian Spectrum program, notable films include: The Guardians, which exposes the rampant corruption that’s transformed Nevada’s guardianship system into a con game; Letter from Masanjia, which looks at the mystery behind a SOS letter written by a Chinese political prisoner that turns up in Halloween decorations sold in Oregon; This Mountain Life, which follows a 60-year-old mother and daughter’s six-month trek through the stunning but treacherous Rocky Mountains; United We Fan, about how super-fans of famous TV shows fight to keep them on the air; and Love, Scott, a heartbreaking film about a young gay musician’s brave recovery after a vicious attacked left him paralyzed.

In the competitive International Spectrum program, notable films include: I, Dolours, a first-hand account from militant IRA activist Dolours Price of her life; Ubiquity, about the ever-expanding digital network and how those suffering from electromagnetic hypersensitivity are coping; Commander Arian – A Story of Women, War and Freedom, where a 30-year-old commander leads her female battalion to retake an ISIS-controlled city; and We Could Be Heroes, the story of a Moroccan gold medal-winning Paralympian who, after being abandoned by his athletic federation, must find the drive to defend his title. 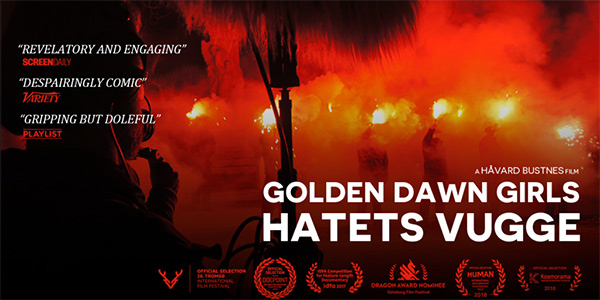 In the World Showcase program, notable films include: 93Queen, about a lawyer and mother of six who creates her Orthodox Brooklyn community’s first all-female ambulance corps; The Feeling of Being Watched, which uncovers one of the largest FBI terrorism probes conducted before 9/11; Call Her Ganda, about the brutal murder of a transgender woman by a US Marine in the Philippines; Golden Dawn Girls, which reveals the women who take the reins of Greece’s ultranationalist party after its leaders are jailed; Grit, which sees the evolution of a young activist fighting for reparations ten years after an industrial accident in Indonesia; The Broker, which offers a glimpse into the goings-on at an Iranian dating agency; Circles, about a high school counsellor who swaps zero tolerance for restorative justice; and My Father is my Mother’s Brother, a touching family narrative about a bohemian singer/artist who becomes a father to his young niece when his sister’s mental health deteriorates.

The Made In Mexico program includes: Artemio, a tale of reverse migration where visa issues force a young American-born boy and his mother to move from California to rural Mexico; Eternity Never Surrendered, a look into the grief of two women who have lost loved ones to crime and corruption; I’m Leaving Now (Ya Me Voy), about the struggles of an undocumented worker planning his return to Mexico; Mamacita, the incredible story of a young filmmaker stumbling upon his grandmother’s questionable past; Rush Hour, which profiles three long-distance commuters who reflect on their quality of life after losing countless hours in traffic; and Witkin & Witkin, a heartfelt human story that explores the identity of two identical twin artists.

The Artscapes program, which showcases creative minds, artistic pursuits and inventive filmmaking, includes: Bathtubs Over Broadway, a fun look at the genre of corporate musicals that were commissioned from Broadway’s hottest talent; Yellow is Forbidden, a behind-the-runway look at the extravagant creations of Chinese designer Guo Pei; Shirkers, about a young writer from Singapore who shoots the country’s first indie road movie; Rezo, a peek into the surreal inner world of Georgian artist and puppeteer Rezo Gabriadze; Don’t Be Nice, about an upstart slam poetry team from NYC preparing for national championships; and Bachman, an epic biopic of Canadian music legend Randy Bachman.

The Nightvision program, which features future cult classics, includes: The American Meme, which explores the age of social media mega-platforms and the stars it creates; I Used to Be Normal: A Boyband Fangirl Story, which looks at four different generations of boyband fans and the impact their fandom had on their lives; Queercore: How to Punk A Revolution, a look back at the pre-internet 1980s, when Bruce LaBruce and G.B. Jones fabricated Toronto’s “queercore” scene out of thin air; and Obscuro Barroco, a mesmerizing audiovisual poem about a Brazilian transgender icon who guides us into the heart of Rio’s festive nights.

The Changing Face of Europe program includes: The Distant Barking of Dogs, about a child and his grandmother who choose to stay in their Eastern Ukrainian village on the  border of a war zone; Of Fish and Foe, the story of Scotland’s last traditional fishing family battling animal activists on the high seas; To Want, To Need, To Love, which follows three people who travel through Europe participating in an ambitious performance art project; Global Family, where a displaced Somali family living in different countries must overcome bureaucracy in the face of a familial crisis; and The White World According To Daliborek, a dark satire that profiles the rise of the right as seen in a lonely middle-aged Czech man.

The Silence Breakers program, which features stories of brave women speaking up and being heard, includes: Afghan Cycles, which tells the story of Afghan women breaking the country’s gender barriers by training on the Women’s National Cycling Team; Netizens, which profiles women who are fighting back against online harassment; Slut or Nut, the Diary of a Rape Trial, a horrifying story of a sexual assault survivor who resorts to bold activism to challenge rape culture in Canada; Nothing Without Us: The Women Who Will End Aids, a film that follows brave women fighting the HIV/AIDS pandemic which disproportionately affects women; Yours in Sisterhood, a revealing look at the progress of feminism through the hundreds of strangers who read and react to 40-year-old letters written to the editors of Ms. Magazine; and Time For Ilhan, about a Muslim Somali-American seeking election to the Minnesota House of Representatives.

The Good Fight program, which features stories of battles–both personal and global–being fought with heart and soul, includes: The Accountant of Auschwitz, about a 94-year-old former SS Guard standing trial for his crimes; Crime + Punishment, which follows 12 NYPD cops as they risk their reputations, careers and safety to blow the whistle on corrupt police practices; Recovery Boys, examining the painful recovery of four men battling opioid addictions; Warrior Women, an inspirational film that charts the lifelong activism and struggle of a Lakota woman; and The Lonely Battle Of Thomas Reid, a David vs. Goliath story about an Irish farmer fighting an American multinational seeking to evict him.

The Redux program, a retrospective showcase of documentaries that deserve another outing on the big screen, will this year feature 19 Canadian films from coast to coast to coast.

Also a premier documentary conference and market, Hot Docs will be welcoming over 2,000 industry delegates who will partake in a wide array of industry events and services, including conferences sessions, receptions and parties, Hot Docs Deal Maker, The Doc Shop and the Hot Docs Forum, May 1 to 2.

CSAs Wrap – By the Numbers