(May 4, 2018 – Toronto, ON) The 25th annual Hot Docs festival is in its final three days. There are a number of Canadian films on today’s schedule. All of these documentaries are screening for the last time today.

The Guardians, for example, had it’s last screening this morning at 10:15. This Mountain Life is also having its last screening this morning. Set in British Columbia, a province that is 75% mountains, a mother-daughter team set out on a six month, self supported journey through the mountain wilderness. The film is a story of an avalanche burial; a group of nuns who inhabit a mountain retreat to be closer to God; an impassioned alpinist; a focused snow artist, and a couple who has been living off grid in the mountains for nearly 50 years. Catch This Mountain Life at 11:45am at the Scotiabank 3.

At 12:30 Snowbirds will have its last screening, it’s directed by Jonnnie Lafrenière. When you think of Florida you might. think of Disney World, the Florida Keys or maybe Little Havana. But Little Québec? Snowbirds is about retired Québécois who choose to live in Florida in order to escape the roughness of Québec winters. Tenderly and with an abundant amount of humour, Snowbirds 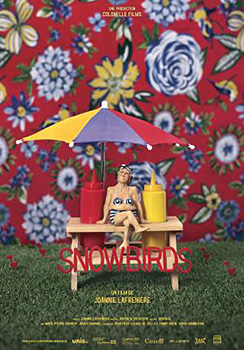 focuses on a reality that is often misrepresented by immersing the spectator in the typical universe of mobile and motorized homes that form Fort Lauderdale. A world where flamingos and French language rule. Welcome to Florida’s French district. Snowbirds screens at the TIFF Bell Lightbox.

Anote’s Ark is a 75-minute doc from Matthieu Rytz that tells the story of the Pacific Island nation of Kiribati, population: 100,000. It is one of the remotest places on Earth, and one of the first countries that must confront the dilemma of our time: imminent annihilation from sea-level rise. While Kiribati’s President Anote Tong races to find a way to protect his nation’s people and maintain their dignity, many Kiribati are already seeking safe harbour overseas. Set against the backdrop of international climate and human rights negotiations, Anote’s struggle to save his nation is intertwined with the extraordinary fate of Tiemeri, a young mother of six, who fights to move her family to New Zealand. At stake is the survival of Tiemeri’s family, the Kiribati people, and 4,000 years of Kiribati culture. Anote’s Ark screens for the last time at 1:00pm at the TIFF Bell Lightbox.

What Walaa Wants has its last screening today. Raised in a refugee camp in the West Bank, while her mother was in prison, Walaa is determined to survive basic training to become one of the few women on the Palestinian Security Forces – not easy for a girl who breaks all the rules. Following Walaa from 15 to 21, with an intimate POV and the exuberant energy of its subject, this is the story of a young woman navigating formidable obstacles, learning which rules to break and follow, and disproving the negative predictions from her surroundings and the world at large. This is Director Christy Garland’s 6th film and it screens today at 3:00pm at the Hart House Theatre on the University of Toronto campus.


Another final screening is Letter from Masanjia. It tells the amazing story of Julie Keith who lives in Damascus, Oregon. One day she finds a mysterious letter hidden in some Halloween decorations. A letter that leads to international scandal, and the closure of a notorious forced labour camp in China. The letter was a plea for help, penned by a prisoner of the Masanjia labour camp, detailed the appalling living conditions and torture practices taking place in the facility. As news of Julie’s unusual discovery spread in the international media, a soft-spoken engineer and Falun Gong practitioner named Sun Yi came forward as the author of the letter. Although no longer imprisoned, Sun Yi still suffered from the constant fear of retaliation from the Chinese government. In spite of this, he bravely set forth on a journey to share his story with the help of Vancouver filmmaker Leon Lee. Letter from Masanjia screens at 4:00pm at the Scotiabank 13.

Also at 4:00pm and also a final screening, 1999 is set sixteen years after director Samara Grace Chadwick left her native Acadia, and returns to Moncton to shoot her first feature film. Her ambitious, intimate and nuanced documentary delves into the memories of a community to probe a wave of suicides that swept through her high school in the late 1990s. 1999 draws on the individual recollections of a community’s members and their personal photos, diaries and amateur videos from that period. Participants rummage through their own archives and share their findings among themselves or with Samara, which results in some highly charged emotional moments. They reconnect with their “adolescent selves” and, inevitably, with the tragedy associated with that period of their lives. 1999 is at the TIFF Bell Lightbox.

In a section of the Festival titled Silence Beakers, the documentary Primas has its second and last screening today. Directed by Laura Bari, the Canada-Argentina co-production asks the question, How do you go on after an appallingly traumatic experience? Rocío, an 18-year-old Argentine girl, has managed to get her life back on track. When she was 10, she was dragged from her bike by a passing stranger, raped, set on fire and left for dead in a field. Incredibly, she survived. Now she tells her story to her cousin, who was sexually abused for years by her own father. Bari transforms these highly painful and personal stories into a portrait of two ordinary adolescents with familiar questions about life. Primas screens at 6:00pm at the TIFF Bell Lightbox.


Playing Hard is also screening for the last time at Hot Docs. It’s an eye-opening documentary about the video game industry that’s about the years-long development of one particular game and the aging genius who held the entire plot in his head for years before the real work began. It’s a film about dreams realized and dreams crushed and is punctuated with details about the industry that are startling. For example, it’s big news if a film makes a billion dollars, but it seems as if in the gaming industry that’s just the beginning and it often takes hundreds of millions of dollars to create a new game. A game that involves real people going through the actions while hooked up to motion-capture cameras. It’s bigger than Hollywood and the stakes are enormous. Directed by Jean-Simon Chartier, the genius behind a game that features Vikings and Knights and Samurai is Jason VandenBerghe (pictured above), the driven artist behind the Ubisoft game For Honour. Playing Hard’s last of three screenings is tonight at 8:15 at the Scotiabank 3.

Laila at the Bridge from director Elizabeth Mirzaei is set in Kabul, where a former child bride named Laila Haidari has been witness to her brother’s 25-year battle with drug addiction. As foreign troops withdraw from Afghanistan and international aid dries up, Laila struggles to prevail over a crisis of addiction and a corrupt government in a country on the verge of collapse. This is the last screening of Laila at the Bridge and it’s scheduled for 8:30pm at The Scotiabank 7.

The last Canadian film having its last screening is The Accountant of Auschwitz. It’s the story of Oscar Groning, who went on trial for the murder of 300,000 Jews. When he took the stand in 2015, at the age of 94, his trial made headlines worldwide. The debate around his prosecution is at the centre of this historic yet contemporary look at justice from director Matthew Shoychet. As survivors travel to Germany to testify, the heinous acts of the Holocaust remain vivid and traumatic. For some, there is no grey area: Gröning was witness and therefore complicit, regardless of his duty to follow orders. Others look at a frail man in the last years of his life and see no reason to pursue charges. The Accountant of Auschwitz screens at 9:00pm at the Scotiabank 13.