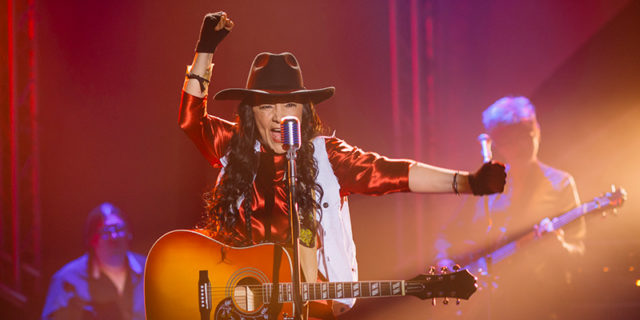 (September 18, 2018 – Toronto, ON) Organizers of the 19th annual imagineNATIVE Film + Media Arts Festival announced the full schedule for the Festival, which runs October 17-21. In all 153 individual media artworks, including 10 dramatic feature length films – the most in imagineNATIVE history will be presented. This year’s Festival features work by 156 Indigenous artists representing 109 Indigenous nations from Canada and around the world; 55% of the works have female directors with 42% male and 3% non-binary or Two-Spirit.

As previously announced, the Opening Night Gala at the Hot Docs Ted Rogers Cinema will be Darlene Naponse’s Falls Around Her. Filled with drama and humour, Falls Around Her commemorates the first starring role in a feature length movie for the legendary Tantoo Cardinal (pictured above). When this year’s Festival wraps on October 21, the Closing Night Gala will be Sgaawaay K’uuna (Edge of the Knife) at the TIFF Bell Lightbox. Sgaawaay K’uuna – directed by Gwaai Edenshaw and Helen Haig-Brown – makes history as the first Haida language feature film.

For the first time, imagineNATIVE will present the iNdigital Space, a large-scale presentation of digital and interactive work in a newly curated space on the main floor of the TIFF Bell Lightbox. iNdigital Space is a free, interactive showcase of more than a dozen VR, games, online platforms and digital web series which will be on display October 16 – 21, 2018. The iNdigital Space is the first step in a multi-year process to enhance the presentation, development and discourse on Indigenous-made digital and interactive media at imagineNATIVE. This year’s selection of audio works is also presented at the iNdigital Space and features sound art and audio documentaries by artists including Janet Rogers and Rosanna Deerchild.

imagineNATIVE will also include: In Conversation with Alanis Obomsawin, who will present a clip from her upcoming documentary; the first Relaxed Screening, which presents work in a cinema environment that is more welcoming to some individuals with various accessibility needs; an Artist Spotlight on the remarkable Two-Spirit elder, filmmaker and activist Marjorie Beaucage with two retrospective screenings including her first film BINGO; Zacharias Kunuk’s latest work Kivitoo: What they Thought of Us, a documentary combining interviews and archival footage about what happened to the Inuit community of Kivitoo in 1962; Black Divaz, a sassy and intimate portrait of what it means to be an Indigenous Drag Queen in Australia today; and Akornatsinniitut – Tarratta Nunaanni, a feature length sci-fi based on the culture, stories, legends and myths of Greenland.

The short programmes at imagineNATIVE will include: Voices from the Western Regions of Turtle Island, celebrating filmmakers from the Western provinces curated by Dorothy Christian, who is this year’s Guest Programmer; Electro, a showcase of Indigenous music videos and talent; The Witching Hour, the annual late night screening of comedy and horror shorts; and Cause + Affect, a selection of thoughtful films about relationships between parents and children.

The imagineNATIVE Art Crawl, sponsored by RBC, will take place Friday, October 19 with stops at six art galleries within the 401 Richmond building including Current Terrain (opening September 18), an exhibition curated by Ociciwan Contemporary Art Collective. This exhibition investigates a range of works by Indigenous artists currently living in Alberta whose work activates the province’s variable territories and geographies, all connected by extensive bodies of water.