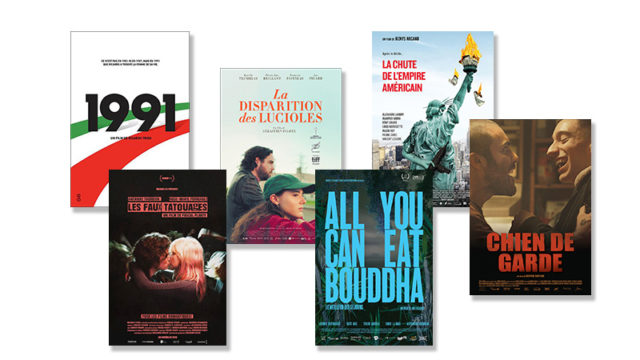 Inside Quebec: Winter 2019
by Maurie Alioff

(January 14, 2019 – Montéal, Québec) In 2018, Quebec’s film industry did not yield megawatt box office winners like 2017’s De pére en flic 2. But a slew of films got made, some of them extraordinary. The year’s slate consolidated an ongoing shift in Quebec’s movie sensibility. This is an era when filmmakers like Denis Villeneuve, Jean-Marc Vallée, Philippe Falardeau, Denys Arcand and Xavier Dolan draw attention in the outside world, working feature films and “television” in the US. Recent pictures like Chien de garde (Family First) and Les Faux tatouages (Fake Tattoos) are authentically Québecois, yet devoid of self-conscious identity assertions, not to mention the promotion of Québec sovereignty.

One of the year’s top mainstream hits was Ricardo Trogi’s 1991, which picked up $3 million, ranking it as Canada’s top box office earner. The movie is a follow-up to Trogi’s 1981 and 1987, the writer-director’s comedy-dramas about himself growing up in Quebec. This time, the protagonist takes off for the obligatory self-discovery on foreign shores.


Given Trogi’s family background, it’s no surprise that his fictionalized 21-year-old self heads for Italy. He’s on a quest for his dream girl, a motive that frequently drives male self-discovery journeys. Once again, “Ricardo Trogi” gets played by Jean-Carl Boucher in a filmmaker-actor association that echoes the late François Truffaut’s ongoing collaborations with Jean-Pierre Léaud in the quasi-autobiographical movies that began with The 400 Blows. “It’s amazing to have grown up with this character,” Boucher told a reporter. “It’s a new person each time. I really approached the three films in a different way.”


Irrelevant aside: I once met Léaud in a Manhattan coffee shop during his first trip to the USA. All alone, he was holding up a dollar bill and chuckling. “Are you the real Jean-Pierre Léaud,” I asked him. “Oui,” he laughed. He was staring at the bill because he couldn’t believe anyone would print “In God We Trust” on money. A breakfast and phone calls followed. Léaud complained that his hotel on the Upper West Side near Central Park didn’t seem like NYC. Where were the neon and the Midnight Cowboy madness?
End of irrelevant aside.

Also among 2018’s top box office earners, Denys Arcand’s La chute de l’empire Americain took in $2.7 million and was clearly the number one story of the year. After a couple of less than thrilling releases, Arcand’s first movie in four years, follows up his Le déclin de l’empire Americain and Oscar-winning Les invasions barbares without returning to the beloved characters in those pictures. La chute slots into the trilogy only in its mockery of the cash crazy moral void we live in.

But Denys Arcand never self-righteously preaches. Following the movie’s Red Carpet screening at the Toronto International Film Festival, Allan Hunter wrote in Screen Daily: “Rather than attack his subject with bristling anger, Arcand approaches it with world-weary wit and the kind of warming optimism that might not appear out of place in a Frank Capra classic.”


In The Fall of the American Empire, a disillusioned PhD (Alexandre Landry) finds millions of dollars in the aftermath of a bungled stickup, and rather than turning his find over to authorities, builds a team of conspirators to launder and hold onto the tainted windfall. When I interviewed Arcand at TIFF, he burst into laughter at the thought of a real life model for one of his characters: a biker gangster who shuttles between prison and a Business Administration course. Why is that he in his movies, and in life, he seems more amused by criminality than horrified by it?

“I don’t know where it comes from,” Arcand told me. “It’s my temperament. It’s me. Who I am. When people tell me that story, I find it unbelievable. In the middle of all the students the biker is taking notes. ‘Oh yeah, money laundering, how do you do that?’ To me this is funny, dramatic, and it is directly connected to reality.”

La Chute has been sold to a number of countries and is scheduled to be released in the U.S. and the rest of Canada in the coming year.


Brothers JP (Jean-Simon Leduc) and Vincent (Théodore Pellerin) are payment-collecting enforcers for their scary kingpin uncle (Paul Ahmarani). Although JP can get as Clockwork Orange as 19-year-old Vincent, he has qualms and is trying to study his way out of crime life. Vincent, on the other hand, is a hyperactive sadist burning with restless energy. He veers crazily between explosions of terrifying violence, mocking fake affection, and when it comes to his family, real love. He especially loves his mom (Maude Guérin) to the point of flirting with incest, a “joke” that gets her boyfriends nervous.

Dupuis portrays the family, which includes JP’s girlfriend Mel (Claudel Laberge), as both dysfunctional and functional. She doesn’t shy away from the horrors inflicted by her protagonists even as she reveals their loyalty and humanity. Pellerin’s startling, attention-grabbing performance recalls volatile Steve in Xavier Dolan’s Mommy, Robert De Niro’s Johnny Boy in Mean Streets and Batman nemesis The Joker. An actor with a future, he has already appeared in Joel Edgerton’s Boy Erased, which features Nicole Kidman, Russell Crowe and Xavier Dolan, as well as the Netflix sci-fi series The OA. Chien de garde was Canada’s submission for the Best Foreign Language Film Oscar 2019 competition, but it didn’t make the short list.

Speaking of Xavier Dolan, 2018 was the year that didn’t work out the way it was supposed to. His long delayed, star-studded (Susan Sarandon, Nathalie Portman, Kit Harington, etc.) English-language debut premiered at TIFF to withering reviews. As of this writing, The Death and Life of John F. Donovan, has no release date. A journalist told me that she believes his work-in-progress, Matt et Max, will probably be on screen before The Death and Life.

All You Can Eat Buddha, which like Chien du garde, La disparition des lucioles, and François Girard’s epic Hochelaga, Land of Souls, was among the year’s top ten at the box office, takes place in a Caribbean, all-inclusive resort. Since I loathe all-inclusive for the way they tend to exploit employees and detach guests from the reality of host countries, I was happy to see Lagarde depict the film’s hotel from the perspective of an alienated tourist. Set in an unnamed country, but shot in Cuba, the picture captures the fake bonhomie and silly ritual entertainments of package tours. At the same time, via Lagarde’s striking cinematography (he’s a DOP turned director), you feel the tropical beauty beckoning to and seducing the main character.


Mike (French actor Ludovic Berthillot) is a huge, expressionless man who wanders around the resort and voraciously eats the excessive mountains of food typical of all-inclusive dining rooms. Mike eats more than any movie character has ever eaten. Obviously, Lagarde is satirizing rampant, mindless consumerism in third world countries. But there’s more to it. All You Can Eat Buddha is a movie about yearning, desire, and the hunger for a caress. Ultimately, The picture goes magical realist when a beached octopus murmurs with a female voice, and apocalypse looms.

Both Sebastien Pilote’s La disparition des lucioles (The Fireflies Are Gone) and Pascal Plante’s Les faux tatouages (Fake Tattoos) zero in on adolescence. Fireflies, Pilote’s follow-up to his poetic and moving films Le Vendeur and Le démantèlement, resembles a teen film. Pilote told me at TIFF that he was playing consciously with the genre, “the motifs of the pop film, the clichés.” But “it is not a film for adolescents. It’s about adolescence,” a story “about youth today,” featuring “a character who has no power.”

The character is a teenage girl barrelling toward adulthood in a state of ambivalent uncertainty. In the opening sequence 17-year-old Léo (Karelle Tremblay) tells her mother 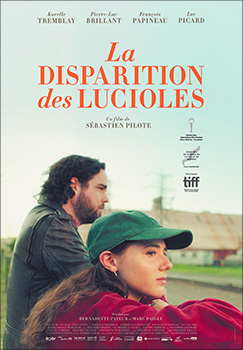 (Marie-France Marcotte) and stepfather (François Papineau) that she couldn’t care less about her future. Léo is a rebel, but she is no activist with a plan. In a moment of despair, she shouts out, “Everything bugs me. I’m going crazy.” Cue Arcade Fire’s song Sprawl II: “These days, my life, I feel it has no purpose. /But late at night the feelings swim to the surface.”

Eventually, Léo drifts into a relationship with fortysomething Steve, a Rush-loving guitar player who lives in his mother’s basement like a teenager. The film doesn’t build to huge crescendos in the relationship, but a moment of rage reveals how much Léo despises her stepfather, a right wing radio host. The Fireflies Are Gone is a visually poetic, understated movie that picked up TIFF’s Canada Goose Award for Best Canadian Feature and the $30,000 prize that came with it.

Likewise, Pascal Plante’s Les faux tatouages handles its subject matter with delicacy and restraint. In the aftermath of a punk concert Theo (Anthony Therrien), who just turned 18, meets Mag (Rose-Marie Perreault). He is introverted and inexplicably morose. She is 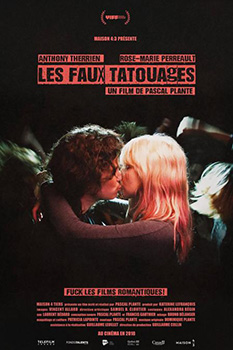 garrulous and coquettish in an in-your-face punky way. Through their relationship, which is frankly and healthily sexual, Plante captures the rhythms, codes, and gamesmanship of 21st century teenagers.


Plante has the confidence to let some scenes play out in long, two-shot takes that tune you in to the characters’ moods, attraction to each other, and humour. The film’s mystery lies in Theo’s sadness. The movie’s strategy is to gradually reveal more about the character without ever filling in everything.

The only doc on the AQCC’s top five is Luc Bourdon’s La part du diable. It’s a dynamic, rhythmic, mood-shifting impression of Quebec in the 1970s. Bourdon brilliantly montaged clips from 200 National Film Board movies, working them into a stream of consciousness that takes you everywhere from tripping hippies to iconic political leaders like René Levesque and Pierre Eliott Trudeau, from partying in the streets to protest riots.


Finally, 2018 was a big year for directors François Simard, Anouk Whissell, and Yoann-Karl Whissell, who go by the collective name RKSS. Their Summer of ’84, a 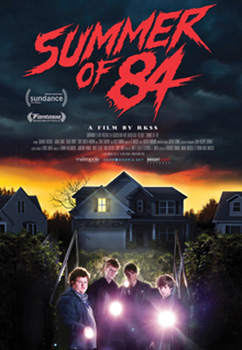 follow-up to their post-apocalyptic kids’ film, Turbo Kid, drew attention at the Sundance Film Festival, as did their previous movie.

Recalling the Netflix series, Stranger Things, and Stephen King’s It, RKSS’s picture nostalgically trips back into the 80s for a story about a group of boys who get themselves into deep hot water. In this case, Davey (Graham Verchere) tries to convince his buddies that the cop next door (Rich Sommer) is the serial killer who has been terrorizing the neighbourhood.

Dealing with themes like sexual awakening, Summer of ’84 references other films (Blue Velvet, Rear Window) and deploys icons like VW Beetles and MTV T-shirts. It effectively plays a cat & mouse game with the viewer and builds toward an unexpectedly horrific ending, open to a sequel.

Once Were Brothers TV Debut