(May 6, 2021 – Toronto, ON) There is a kind of myopia that happens when your focus is on one particular thing even if that thing is the fairly broad subject of Canadian film and filmmakers. I probably heard of Bruce Mau, maybe back when I was in advertising and equally concerned with design as I was with the words on the page, but I’m not sure. When I learned this innovative design guru was Canadian and there was a documentary about him that played at SXSW and is now playing at Hot Docs well, now I’m interested.

Mau is co-directed by brothers Benji and Jono Bergmann and it’s an Austria-USA co-production. In the opening few seconds you know you’re in for something different. This isn’t going to be a gritty exposé of the design, advertising and art worlds. This is going to be something so perfectly crafted that every step the subject takes, every word out his mouth, every scene he is in plays out on the screen in such a way that you cannot imagine there being another take, another angle, another way of saying something, another way to light or frame a shot.

If the visuals make you concentrate on the measured pace of the film, it’s what comes out of the man’s mouth that will absolutely stun you. Bruce Mau isn’t talking beyond design when he says that through design, “we have the capacity to change the world.” This comes less than 4 minutes into the documentary and was proceeded by a tightly edited montage of other people trying to explain who and what Bruce Mau is. My take? He’s part magician. He can make you believe you can change the world, and if not that, perhaps more importantly, you can change yourself. 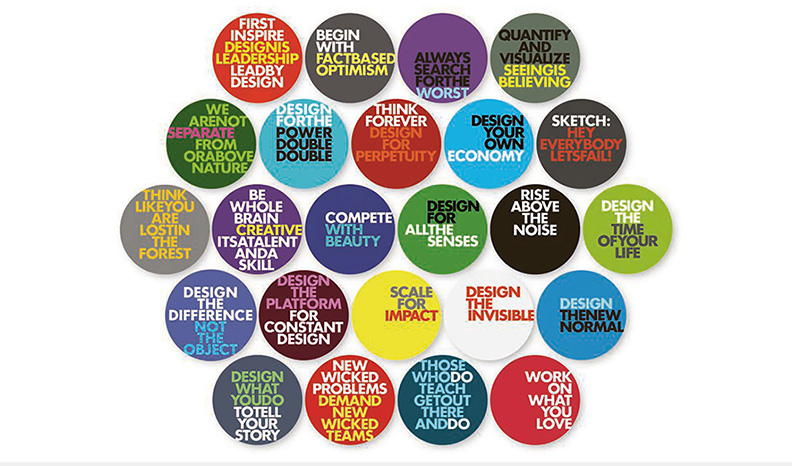 One of the graphic elements used in the film is a coloured circle, each a different colour each with a different set of words all in caps. One states BREAK THROUGH THE NOISE another says DESIGN THE NEW NORMAL and a few pointedly personal statements like DESIGN THE TIME OF YOUR LIFE and the one that hit me the hardest, WORK ON WHAT YOU LOVE.

The film tracks his progress through some of his projects and those projects are all mind blowing. He’s worked for Coca-Cola, the country of Guatemala, Mecca…yes, that Mecca, he once turned down a chance to change the image of the famed Metropolitan Museum of Modern Art (MOMA), in New York. Each is a chapter in the film and each fulfills the promise of all documentaries: you will learn something interesting and/or important.

I’m not a fan of “warts and all” documentaries, and in this case in the closing scenes of Mau, the filmmakers take the man back to his very beginnings, to the home he once knew on the fringes of Sudbury, Ontario. I think it was an unnecessary tangent. By time we get there we have learned earlier in the film that his upbringing was almost non-existent and that his early life may or may not have contributed to the singular larger-than-life success he has enjoyed.

Mau is a rare treat. It will, or should, push you to push your own boundaries while at the same time urging you to become a participant in the optimistic vision that is repeated several times through the film. That is, since everything around us was once designed by someone, then through design we can change everything around us, and that means the world.

Mau is available online from Hot Docs, which wraps this Sunday. Don’t miss it.