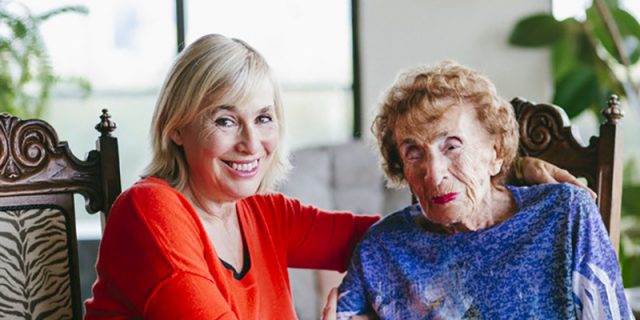 Meet Stella. You’re Going to Love Her.
by Staff

(July 15, 2020 – Toronto, ON) Estelle Craig, ‘Stella’ to her friends and family, was a CBC journalist, playwright, founder of the World Adventure Tours travelogue series, founder of the Cinema 16 Festival, and publisher of a children’s magazine, Small Types. She was also the president of the Variety Club and the Toronto Women’s Press Club. She wrote seven books between the ages of 95 and 99. Then she wrote five more after turning 100.

Stella & Co. is a documentary by filmmaker Robin Baker Leacock. It features her mother Estelle ‘Stella’ Craig and eight friends aged 75 to 105 living in a seniors residence.

Filled with moving personal stories and candid interviews tackling a range of thought-provoking issues, Stella & Co. delivers an inspiring and optimistic look at what it means to age in these uncertain times, through humour, music and storytelling.

Upon spending time with Estelle and her friends at a dynamic seniors residence in Florida, Baker Leacock wanted to show what can be gleaned from some of the residents more joyful life experiences, and for people to realize they are capable of great things – at any age.

“My hope is that this film will encourage people to remember the great treasure we have in our older generation,” said Baker Leacock. “We are living in extraordinary times, where our aging population is vulnerable as never before. The goal is to offer viewers a much-needed forward-thinking shift in perspective. Aging is a subject that affects all of us. There is so much to do in terms of caring for our older population.” More specifically, talking about her late mother, she aded, “She never met a microphone she didn’t like.”

Estelle Craig was a maverick and constantly lived and proved the phrase that age is just a number through her never-ending ideas, a sense of humour, and projects. She passed away on February 11, 2019 just before her 104th birthday.

Jay Baruchel to be Honoured by ACTRA

Cast for To The Bone Announced