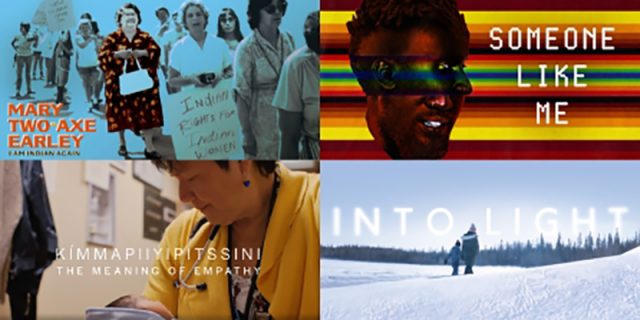 (April 27, 2021 – Toronto, ON) Hot Docs begins online in two days and Vancouver’s DOXA will also stream online beginning May 6. The National Film Board of Canada (NFB) has two films running in both, and two additional short docs running at Hot Docs.

The films running at both festivals are Someone Like Me by Sean Horlor and Steve J. Adams, a directing duo from Vancouver who create work that shines a spotlight on misunderstandings—queer and otherwise., and Kímmapiiyipitssini: The Meaning of Empathy by Elle-Máijá Tailfeathers, a multi-award-winning filmmaker and actor, and member of the Kainai First Nation and the Sámi in Norway, whose recent work includes the acclaimed 2019 feature The Body Remembers When the World Broke Open.

Someone Like Me was produced by Teri Snelgrove and Shirley Vercruysse, and executive-produced by Shirley Vercruysse for NFB’s BC & Yukon Studio. In it we meet Drake, a young gay man from Uganda, who leaves behind everything he knows to attain the universal freedoms everyone deserves: to be who he is and love whomever he chooses without fear of discrimination, persecution, or violence. A group of queer strangers unite to resettle Drake in Vancouver, but they are tasked with a year-long commitment to someone they’ve never met, and struggle with the challenging conditions of this support. Together, Drake and his sponsors embark on an emotional journey in search of personal freedom, revealing how in a world where one must constantly fight for the right to exist, survival itself becomes a victory.


Elle-Máijá Tailfeathers‘ film Kímmapiiyipitssini: The Meaning of Empathy is an intimate portrait of survival, love and the collective work of healing in the Kainai First Nation in southern Alberta, a Blackfoot community facing the impacts of substance use and a drug-poisoning epidemic. Community members active in addiction and recovery, first responders and medical professionals implement harm reduction to save lives. This work is contextualized within the historical and contemporary impacts of settler colonialism; Kímmapiiyipitssini: The Meaning of Empathy draws a line between the effects of colonial violence on Blackfoot land and people and the ongoing substance-use crisis. Held in love and hope for the future, the film asks the audience to be a part of a radical and profound change in Tailfeathers’ community.

The two short docs include Into Light by Sheona McDonald and Mary Two-Axe Earley: I Am Indian Again by Courtney Montour.

Into Light explores what happens when a child reveals who they truly are on the inside and how does a parent set aside their own expectations to help them become their most authentic self? Set against the northern landscape of Yellowknife, McDonald’s new documentary captures a season of change as a mother and child navigate the complexities of gender identity together. As elemental changes parallel this extraordinary journey, the return of brighter days uncovers a confident and social little girl with an encyclopedic knowledge of dinosaurs, a deep love of animals, and a parent who fully embraces this magical person. Into Light was produced by Teri Snelgrove and executive-produced by Shirley Vercruysse for NFB’s BC & Yukon Studio.

Mary Two-Axe Earley: I Am Indian Again shares the powerful story of Mary Two-Axe Earley, who fought for more than two decades to challenge sex discrimination against First Nations women embedded in Canada’s Indian Act and became a key figure in Canada’s women’s rights movement. Mohawk filmmaker Courtney Montour uses audio conversations recorded by Alanis Obomsawin as well as never-before-seen archival footage to engage in a deeply personal conversation with the late Mohawk woman, who stood up to challenge sexist and genocidal government policies that stripped First Nations women of their Indian status when they married non-Indian men. She speaks with Cree activist Nellie Carlson, Mary’s lifelong friend and co-founder of Indian Rights for Indian Women, and meets with three generations in Mary’s Kahnawà:ke kitchen to reflect on the legacy of a woman who galvanized a national network of allies to help restore Indian status to thousands of First Nations women and children. Mary Two-Axe Earley: I Am Indian Again was produced by Kat Baulu and Ariel Nasr and executive-produced by Annette Clarke for the Quebec-Atlantic Studio.

Also see: Look for links to both Hot Docs and DOXA on our May 2021 Film Festivals page.