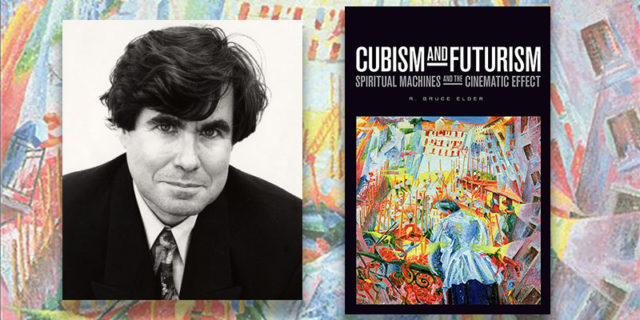 (October 25, 2018) There are filmmakers and filmmakers and then there is R. Bruce Elder. If you’re not familiar with his work we have an in-depth article and his filmography online and there are links at the end of this article. He is also a celebrated author and his new book, Cubism and Futurism: Spiritual Machines and the Cinematic Effect will be launched at Ryerson University on Friday, Nov. 2, 2018.

R. Bruce Elder is an award-winning filmmaker, writer and professor who received a Governor-General’s Award in Visual and Media Arts. Know for creating film cycles, which groups several of his films under one theme. One example, the longest film cycle ever made runs some 42 hours (2067 minutes) in duration and titled The Book of All the Dead. The entire work was screened at Anthology Film Archives in New York City, and at Toronto’s Images Festival. His current film cycle, The Book of Praise, makes extensive use of computer-image generation, highlighting his fascination with mathematics and digital technology.

Elder has also been a guest lecturer at institutions across North America and around the world and has written books and articles on film, music, poetry and the visual arts. His new book traces the rise of a new scientific theory, which changed our conception of time, space, objecthood and personhood and demanded revolutionary, new art forms.

Cubism and Futurism were closely related movements that vied with each other in the economy of renown. Perception, dynamism, and the dynamism of perception—these were the issues that passed back and forth between the two. Cubism and Futurism: Spiritual Machines and 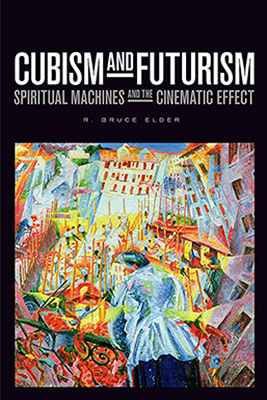 the Cinematic Effect shows how movement became, in the traditional visual arts. Further, it explores the role of the cinema in amplifying this interest, by demonstrating that with the advent of the cinema the time was over when an artwork strived to lift experience out the realm of flux and into the realm of the changeless eternal.

The cinema at this time was understood as an electric art, akin to X-rays, Lumia, and sonic energy. In this book, Elder connects the dynamism that the cinema made an essential feature of the new artwork to the new science of electromagnetism.

Elder portrays Cubism as a movement on the cusp of the transition from the Cartesian world of standardized Cartesian coordinates and interchangeable machine parts to a Galvanic world of continuities and flows. Drawing on the ideas of Marshall McLuhan, Elder shows that Futurism, by way of contrast, embraced completely the emerging electromagnetic view of reality.

Cubism and Futurism: Spiritual Machines and the Cinematic Effect examines the similarities and differences between the two movements’ engagement with the new science of energy and shows that the notion of energy made central to the new artwork by the cinema assumed a spiritual dimension, as the cinema itself came to be seen as a pneumatic machine.

Published by Wilfrid Laurier University Press, the launch of Cubism and Futurism: Spiritual Machines and the Cinematic Effect is being hosted by Pages UnBound and Ryerson University’s School of Image Arts at the School of Image Arts, 122 Bond St., Toronto. Elder’s remarks will begin at 7:00 pm and shortly thereafter he will be interviewed by Jim Shedden, arts critic, and programmer, and Director of Publications at the Art Gallery of Ontario. If you are interested in attending click here.