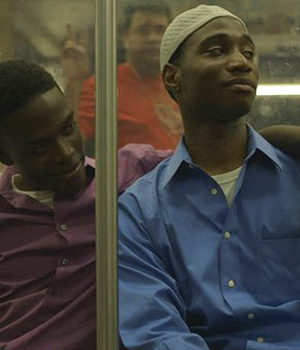 (October 15, 2015 – Edmonton, Alberta) The first edition of Edmonton’s Rainbow Visions launches tonight with the American film, Naz & Maalik. The synopsis is basic: Over the course of one Friday afternoon in Brooklyn, two closeted Muslim teens have their secretive lives rattled by FBI surveillance. Intimate and meditative, Naz & Maalik examines the mysterious forces that animate teenage minds.

Written and directed by Jay Dockendorf, Naz & Maalik is his first narrative feature. His short documentary Vigilante Copy Editor (2013) was a featured Op-Doc of The New York Times. He co-composed the music for Naz & Maalik with Adam Gunther. Winner of Tribeca Film Institute’s IWC Filmmaker Award for Naz & Maalik, he has two more features in development with producers Margaret Katcher and Jacob Albert.

Other highlights of the festival, which wraps on Sunday, include a double bill of archival shorts and canonical features by three unforgettable artists: Stanley Jackson, Claude Jutra, and Bruce LaBruce. From a closeted NFB narrative to 60s vérité hybridity and 80s punk experimentalism, this capsule program is a window into our archive and a rare opportunity to see the remastered Jutra and undying LaBruce.

Bruce LaBRuce will be in attendance on Saturday when two of his shorts will screen at the Metro Cinema. I Know What It’s Like to be Dead is his 1989 short that runs 15 minutes. Recently presented at the Museum of Modern Art retrospective held in honour of LaBruce, this gritty self-portrait provides insight into the gay cineaste’s pre-narrative phase. A self-portrait and meditation on mortality from one of Canada’s most revered and enduring mavericks.

It will be followed by Bruce and Pepper Wayne Gacy’s Home Movies, which was co-directed by Bruce LaBruce and Candy Parker in 1988. Zombies, skins, serial killers, organs, oral, “borrowed” sound: many motifs that will come to define LaBruce`s oeuvre are presented here as a Super8 collage as if made by the children of notorious serial killer John Wayne Gacy. A must-see from the LaBruce/Parker collaboration that has been screened at Museums and festivals worldwide comes to Edmonton for the first time ever.

À tout prendre is Claude Jutra`s 1963 feature. Running 99 minutes, it’s a semiautobiographical experimental narrative that shows a privileged young filmmaker named Claude who is passionately involved with a black model named Johanne, who suddenly guesses that he likes boys. He strolls with Johanne up the Mountain, the famous gay cruising area, where he fantasizes that the couple is attacked by a leatherman biker. Johanne gets pregnant, Claude dumps her, and the relationship dissolves in narcissism, rejection, and bitterness. Canada’s first explicitly gay-themed feature film is a nouvelle vague masterpiece that conjures a Québécois Truffaut or Cassavettes.

Look for much more information for the Rainbow Visions Film Festival online.