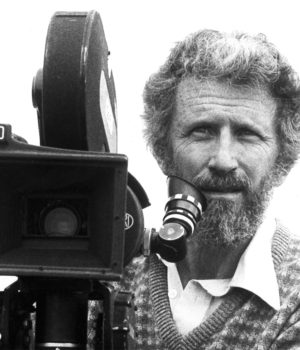 (November 1, 2015 – Toronto, ON) Renowned Canadian filmmaker Christopher Chapman has died. He was 88 when he passed away at the Reachview Village long-term care facility east of Toronto in Uxbridge, Ontario. Chapman was a writer, director and cinematographer whose early films concentrated on nature and the environment. Born in Toronto, his twin, Francis was born just before him, just before midnight on January 24, 1927.

Chapman’s father was the distinguished Toronto architect Alfred Chapman and his mother the concert pianist Doris Chapman. Christopher Chapman’s first film, The Seasons, ran 18 minutes and was produced in colour and funded by Imperial Oil, won the Canadian Film of the Year in 1954, and A Place to Stand received two Academy Award nominations and won the Oscar for Best Live-Action Short in 1968. Chapman was the first Canadian filmmaker to receive an Oscar outside of the NFB. A Place to Stand was also named Canadian Film of Year at the Canadian Film Awards (CFA). He was awarded the Royal Canadian Academy of Arts medal for distinguished contribution to the art of cinematography and presented with the first Ontario Film Institute Award for his distinguished achievements and significant contribution to the development of the Canadian film. He was the recipient of the 1967 Centennial Medal, the 1977 Jubilee Medal and the Commemorative Medal for the 125th Anniversary of Canadian Confederation. Chapman was appointed a Member of the Order of Canada in 1987, and awarded a Doctor of Laws by Ryerson University in 2000. Chapman served as president of both the Royal Canadian Academy of Arts and the Directors Guild of Canada.

His projects include films shot in 16mm, 35mm, 70mm, Multi-Dynamic Image, 3D in 35mm and 70mm, and IMAX. He also created a number of multi-media projects. He created major films for expositions, film companies, corporations, NASA and governments, both federal and provincial. In most of his films, Chapman served as creator, director, cinematographer, editor, and in a number of cases producer or co-producer.

Interviewed by Cinema Canada Magazine, this is how he responded to the question, How did you get your start making films at a time when there was no appreciable film industry in Canada?

“I had been in advertising for six years. I found that I just didn’t like advertising at all. I didn’t like the whole concept of advertising, and there was something inside of me fighting it all the time. I liked the company I was with and I enjoyed the kind of work I was doing, but the reason for it really bothered me. Had I stayed another year, I would have probably resolved my doubts and continued. So I made a very quick decision to leave and buy a camera, a basic Bolex with a wind-up ‘motor.’ I was not a film buff. I had not even taken still photography, but I was searching for a medium of expression, and film had a ready fascination for me. I bought a very basic camera and went up to a cottage my father had on Lake Simcoe and settled down for the winter, not really thinking that I could make a film. But I wanted to explore my relationship to the motion picture camera and, in a sense, what I felt was its relationship to me. I’ve since shot all my own films, and I am still learning about cinematography.”

For a number of years Chapman and his wife Barbara-Glen, who was by his side when he died, lived on a farm in an early Ontario stone house near Sunderland, Ontario. They retired to Uxbridge some years ago. Chapman was 88 when he died on October 24 at the Reachview Village long-term care facility in Uxbridge, Ontario