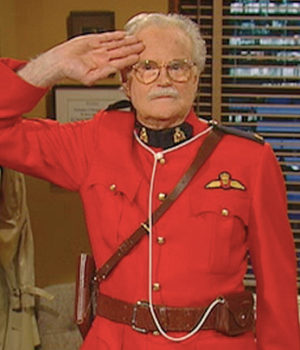 (November 2, 2016 – Toronto, ON) Comedian, actor and recipient of the Order of Canada, Dave Broadfoot has died. Usually thought of as a comedian, primarily for his work on the series The Royal Canadian Air Farce where he played, first on the radio series and then later on television, such marvellous characters as hockey player Big Bobby Clobber, Corporal, and later Sgt. Renfrew (pictured), an RCMP officer who never seemed to get his man, and David J. Broadfoot, the parliamentarian for Kicking Horse Pass. He got his start in early television and with the icons of early TV comedy, Wayne and Shuster. Broadfoot was 90 when he passed away yesterday, November 1st.