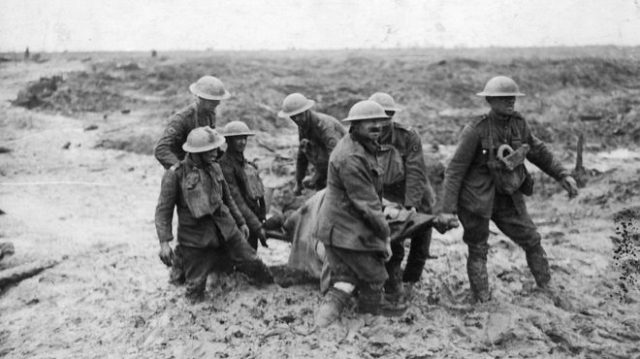 (November 1, 2018 – Toronto, ON) World War One ended on the eleventh hour of the eleventh day of the eleventh month 100 years ago and it was called Armistice Day. It is now arguably November’s shining moment in Canada – Remembrance Day. You’d think the country that sacrificed so greatly at Vimy Ridge and Dieppe would have a film tradition to match. Unfortunately, it’s not a huge library, and one largely derided by critics, especially the ones who aren’t keen on Paul Gross’s blue-eyed brand of patriotism (seeing as he wrote, directed and stars in two of the films on this list).

Herewith, a subjective, random look at the Canadian war effort on film (and two TV series).

THE DEVIL’S BRIGADE (1968): The Hollywood-ized story of the 1st Special Service Force, a joint Canadian-American commando unit in WW2. Saw it when I was 10 and loved it. I recently re-watched it and was highly entertained, though some of it was laughable (particularly the German, badly spoken phonetically by American actors).

History was rewritten in this one to make it more like The Dirty Dozen – with American convicts (Claude Akins playing the nastiest of them) teaming up with disciplined Canadians, “the best of the best-trained army in the world.” In reality, both sets of troops were considered top-notch soldiers.

William Holden is the American commander, Cliff Robertson (with an accent somewhere between Scottish and Irish) is the Canadian. As for the plot, their victories in Italy aside, the real climax comes when the Yanks and Canucks learn to respect each other during training by brawling together against 35 local lumberjacks.

PASSCHENDAELE (2008): I’m going to go out on a limb and say Paul Gross undeservedly took a critical beating for his directing, writing and starring turn in this film set in the grinding Battle of Passchendaele (a.k.a. the Third Battle of Ypres). Yes, it was long, and yes, as much time was devoted to the relationship between Gross’s character and a nurse (Caroline Dhavernas) who volunteers as a battlefield nurse to keep track of him and her brother (Joe Dinicol). If a Hollywood studio did this kind of thing, nobody would say boo. The battle scenes were suitably harrowing and they were actually reasonably true to events according to war scholars. But critics seemed to expect something more solemn out of a movie that dramatized one of Canada’s most memorialized wartime battles.

Passchendaele grossed $5 mil at the theatres, which made it the top-grossing film in the country that year. However, that was only a quarter of its budget – which speaks volumes to the deck stacked against the Canadian film industry. 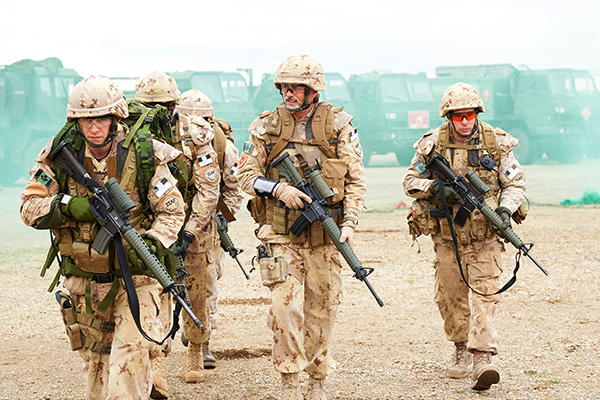 HYENA ROAD (2015): Undeterred, Gross went on to write, direct and co-star (with Rossif Sutherland) in this involved tale of Canadian soldiers and intelligence trying to parlay a blood-war between rival Taliban operatives in Kandahar. Sutherland is a top-notch sniper who just wants to get things done one bullet at a time. Gross is the intelligence officer constantly telling him to stand down because he doesn’t know how things work. Hyena Road got better reviews than Passchendaele (albeit not raves). Gross won best director for it at the DGC awards.

TRENCH 11 (2018): Rossif Sutherland as a Canadian soldier again, this time a WWI “tunneler” (trained in digging under enemy troops), who’s called in to deal with a mysterious German tunnel that has been locked to keep whatever is there in. Trench 11 is a zombie film (sort of), a claustrophobic nail-biter about a handful of Americans, Brits and a Canadian trying to escape from the bunker with infected Germans below and gun-toting Germans above. Also has this great line, Sutherland to his French girlfriend, “If you love Paris, you’re going to love Winnipeg.”

AFGHAN LUKE (2011): Trailer Park Boys co-creator Mike Clattenburg went looking for serious cred with this meandering story about an investigative journalist (Nick Stahl) who investigates reports of mutilations committed on corpses by Canadian snipers. Above reproach as the Canadian Armed Forces are, a platoon accompanies Luke, under the command of Sgt. Rick (Steve Cochrane) hoping to clear their reputations. Alberta fills in for Afghanistan quite nicely here.


BOMB GIRLS (2012-2014): WW2 as soap-opera-at-home. This well-written Global series about four women working in a munitions factory sold very well overseas and was popular here (originally planned as a six-part miniseries, it ran two seasons, followed by a two-hour TV movie). Starred Meg Tilly as the floor matron Lorna, Jodi Balfour as the rich-girl Gladys, Ali Liebert as the closet lesbian Betty and Charlotte Hegele as Kate, an abused runaway who finds a sense of belonging with the bomb girls.

X COMPANY (2015-2017): This acclaimed CBC series followed homegrown agents during WW2 from their drills in a classified Ontario training camp (based on the real thing that existed between Oshawa and Whitby) to their assignments across enemy lines. Starred Evelyne Brochu as the designated femme-fatale spy, Jack Lasky, Warren Brown, Hugh Dillon and Dustin Milligan (seen these days as the veterinarian in Schitt’s Creek).

CANADIAN BACON (1995): A war movie in only the loosest sense. Michael Moore’s only non-documentary was this farce about a fictional plan by the U.S. to invade Canada. Realizing that the war industry keeps the economy afloat, but that there’s no one currently to wage war with, the President (Alan Alda), he tries to drum one up with his neighbours to the North. Features John Candy as a Canada-hating U.S. sheriff, and (my favourite bit of casting) deadpan comic Steven Wright as a Mountie. Best seen in bits.

Editor’s Note: Click here to learn more about the 100th anniversary of Armistice Day in Canada.