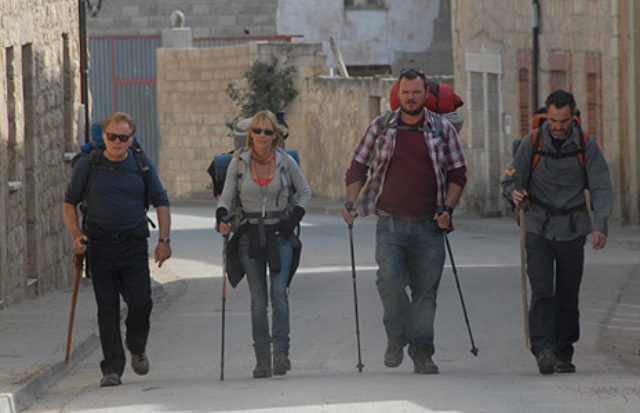 (November 9, 2011 – Toronto, Ontario) All movies are stories and all stories have a beginning, middle and end, even if editing sometimes confuses that linear process. I recently saw two road movies, which are similar in their construction, but different in ways that go beyond the modes of transportation used in each film. The first was the long-awaited Don Shebib film, Down the Road Again. The second was the Emilio Estevez film, The Way. To start at the beginning of Shebib’s film, you have to go back a few decades.

It’s hard to think of Down the Road Again as a sequel. In today’s movie making world sequels are often planned as the first movie is being shot, if not before. Release schedules are often based on generating as much anticipation for the sequel while the first film is still in theatres or as it’s about to be released on DVD. Recent successful multi-film releases include the Harry Potter series of films and the Pirates of the Caribbean franchise. Some films, like the James Bond films, have survived across 5 decades with six different actors playing the shaken not stirred, licensed-to-kill hero in a so far endless string of more than 20 features. As sequels go, Down the Road Again, coming 41 years after Goin’ Down the Road was released, hardly qualifies and only came after one of the lead actors in the first film, Paul Bradley, had passed away. With his death came the death of his character, Joey, and shortly after the start of Down the Road Again Joey’s ashes are delivered to his old pal, Pete, played by Doug McGrath in both films.

In The Way, Martin Sheen plays a comfortable, well-to-do, ophthalmologist whose son – played by his real son, the writer-director Emilio Estevez – has tired of an upper-middle-class existence and heads out to travel the world starting with the famous 500-mile European pilgrimage route along the Camino de Santiago, which starts in France and ends in Santiago de Compostela, Spain. I was attracted to the film because of my own time in Spain, although I had never made it to the north coast, and the fact the film costars Canadian Deborah Kara Unger. It also costars James Nesbitt, a Scottish actor I like a lot for his TV portrayals in the series Jekyll and more recently in Monroe, and Yorick van Wageningen, a Dutch actor who provides welcome comic relief. It shouldn’t destroy your enjoyment of the film if I reveal that we learn very early in the story that the boy dies on the first leg of his journey and a few scenes later Sheen’s character decides to finish the pilgrimage taking his son’s ashes with him.

There the films diverge in their mode of transport. The Way is done on foot, and sometimes some try to use a bicycle. Pete goes looking for the car he and Joey drove to Toronto in Goin’ Down the Road. It’s the car that carried them to Vancouver when they quit Toronto in the closing scenes of that film. It might be a bit of an in-joke that Don Francks turns up in a cameo appearance as the keeper of the old car. In real life, in addition to his acting career, Francks is often the go-to guy for filmmakers looking for special vehicles. The films also take different paths in that Sheen’s journey was filmed along the actual famed route and in real locations across northern Spain during a six-week shooting schedule. Down the Road Again might be about a journey from Vancouver to Cape Breton, but it was shot almost exclusively in and around Toronto.

Both films are ultimately stories about family and are unabashed in their attempt to leave no dry eyes at several points during the telling. For some reason I expect to laugh when I see a comedy and I expect to be frightened if I see a scary movie, but I dislike being manipulated into false emotion over some celluloid characters on the screen when I am watching drama. The power of the medium, plus the craft of the directors and the ability of the actors to crack my stoic exterior usually leaves me secretly enthralled at their ability to wrest water from a stone, but there you are. By the way, most credit for emotion must go to the composer. As I (and others) have written, the pictures and dialogue may tell you what to think, the music tells you what to feel.

Speaking of music, in Down the Road Again, the ancient Chevy convertible is like a ’60s jukebox on wheels, each song used perfectly to support a specific scene. The music in The Way is also excellent. There is one scene in particular set in an inner city barrio where the local “gypsy” population has gathered to welcome the four pilgrims. The guitars produce a rising, rhythmic thunder and the unique Spanish hand clapping in time and in syncopation with the beat provides an envelope for the half-Spanish half-Moorish singing which transforms what sounds like pain into a heart-grabbing passionate rhapsody that for just a moment called to me and said quite clearly this is what is missing in today’s modern YouTube/mp3 compressed and filtered life.

There are surprising performances in both films. Doug McGrath is far too good to be so unused in film. The seemingly eternally young Kathleen Robertson showed more than I had expected and there are several tough scenes between Jayne Eastwood and Cayle Chernin, who was dying as the film was being made and did not live long enough to see it released. The benefit of the gap between Goin’ Down the Road and Down the Road Again is that you really don’t need to see the first to understand the second. Beautifully digitized scenes from the original are used in rare flashback sequences and help rebuild the long lost connection between Pete and Joey. The final scenes and reveals are a bit of a stretch but if you were there in the 60s they are not only plausible but more than likely based on some truth somewhere. You are forced to wonder what sequel Shebib would have made had Paul Bradley not died, but this film honours his memory and the memory of an almost iconic Canadian character, Joey, as well as the time when two young kids from Cape Breton thought the streets of Toronto were paved with gold.

I hope The Way gets a good run and Mongrel Media, its Canadian distributor, should be applauded for supporting what is a small, independent film despite the pedigree of its director and cast. Martin Sheen can often go over the top and there’s one scene which recalls his darkest days while making Apocalypse Now, but he is excellent throughout. Unger’s portrayal of a woman looking for some way forward and unable to let go of her past is honest, raw, and in places surprisingly powerful. She is so much better in this than she was in the series Combat Hospital.

Road movies follow that old dictum about travel. It isn’t the destination it’s the getting there that’s important. Both of these movies take very different paths and both are ultimately very different stories. That said, the lesson from both films just might be that although we are all on our own separate journeys we share the same path and it is better to help our fellow wayfarers than to abandon them at the side of the road.