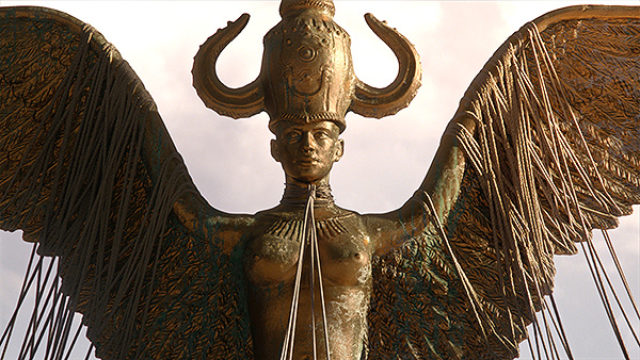 (September 9, 2015 – Montréal, QC) – This city’s Rodeo FX has once again garnered an Emmy Award nomination for Outstanding Special Visual Effects for its work on almost 200 visual effects shots for Season 5 of the hit series, Game of Thrones. The visual effects studio used its expertise in animation, digital matte painting, and crowd simulation to create key sequences from scratch, including the destruction of the Harpy statue atop the Meereen temple, the eerie Smoking Sea of Valyria, and the ancient city of Volantis. Rodeo FX, already the winner of an Emmy for its work on Season 4, has extended and deepened its work for the series.

The first episode of Season 5 shows the destruction of the Harpy atop the pyramid that Rodeo FX created last season for the fictional world of Meereen. A group of the Unsullied has tied ropes to the golden statue and pulls it down. The Harpy topples, sliding down the massive structure, smashing bricks and throwing up sand in its wake, before it lands on its side on the ground. The scale is massive, with huge objects colliding, throwing up chunks of brick and dust.


“This was a huge CG build and complex work for TV,” said Matthew Rouleau, VFX Supervisor on the show for Rodeo FX. “It is challenging because we’re aiming for feature film quality, but the schedule is not the same as on features.”

Rodeo FX worked from previs for the whole sequence that Joe Bauer, the VFX Supervisor on Game of Thrones, delivered. The artists added elements to make the fully CG scene look more alive and complex. The studio used matte paintings for the background.

“We built on last year’s work,” Rouleau said. “Needing close ups of the pyramid meant we had to build it up brick by brick. Every brick was modeled and textured independently.”

Rodeo FX blended live action shots with effects, compositing them together. Using its experience with a pivotal scene from its previous work on Unbroken, when a B24 bomber crash lands on a runway, the team was able to create a realistic feel of sand flying using practical elements that it shot in its Montreal studio.

Old Valyria – Ruins built from the ground up
With a bound and beaten Tyrion (Peter Dinklage) recovering in the hull of his small open sailboat, Jorah (Iain Glen) steers toward the ruins of Old Valyria on their way to Meereen and Queen Daenerys. The mood of the scene in Episode 5, “Kill the Boy”, is heightened by the Smoking Sea, mist off the water, and the collapsing ruins of once-great buildings. All of this closes in on them as they approach an aqueduct topped with what appear to be stone statues.

In fact, almost all of this environment – except for some trees, the actors, and their boat – is digital matte paintings, projected on simple geometry. This mysterious environment was created by Rodeo FX in its L.A. and Montreal studios under the direction of Deak Ferrand, Senior Matte Painter at Rodeo FX, who worked closely with Bauer.

“Deak and Rodeo FX worked on top-of-frame grabs of the cut sequence and really laid out Old Valyria from scratch, using our simple guideline to make it into a super-advanced Angkor Wat,” said Bauer, referring to the large temple complex in Cambodia. “We’d done internal design work on the aqueduct ruin where the encounter with the Stone Men happens – and a rough look at the distant ruins far beyond – but it became very much what you saw in the episode in Deak’s and Rodeo’s hands.”

“We started with the live plates, which were simply the boat on the river with some trees and a partial set of the aqueduct,” explained Ferrand. “We conceptualized all the shots on stills, including a big aqueduct concept. From there, we moved quickly to digital matte painting.”

Ferrand and his team added trees, changed the entire sky, and did water extensions in CG. The overhead shot at the beginning of the scene, as Tyrion regains consciousness, is a complete CG replacement. Rodeo FX reframed some of the plates to give the scope of the sequence, at times resizing them because they were too big in the frame. They also added mist enhancement coming off the river, which adds to the spooky feel.

“Once we’d designed this ruined city, the main challenge of this sequence was the progression as the boat travels toward the aqueduct,” explained Ferrand. “It’s one thing to create shots that are not already put together. But here, what is in the background in the first shot becomes the foreground of the tenth shot.”

Ferrand worked side by side with Bauer on the look of the city. Since Old Valyria flourished during the time of dragons, they considered adding dragon statues and iconographies on top of the ruined structures. They were not satisfied with the overall impression, so they chose to remove any references related to dragons. It is only when Tyrion and Jorah pass the first gate and reach the aqueduct that there is resolution to their travels. The brooding dynamism of this digital environment comes to life as the Stone Men attack.

The city of Volantis – Invented from a bridge flyover
Rodeo FX built the city of Volantis, a new environment on the show in Season 5. The VFX studio developed the whole city completely in CG, including the crowds. Working from a live plate using a Roman bridge in Córdoba, Spain as a stand-in, Rodeo FX created the buildings and market on the bridge, as well as the background matte painting. The team modeled everything in the scenes, including gutters, roof tiles, and windows.

“We had to respect the parallax of the live-action plates,” Rouleau explained. “It was a challenge because the flyover shot was taken from a drone and the movement was crazy.”

For crowd simulation, the team used new software, a plug-in for Maya called Miarmy, which Rouleau found well-built and artist-friendly, helping them to create realistic-looking results. They also did MoCap, using a system that is new to them, Perception Neuron by Noitom.

“We wanted the long bridge of Volantis to be bustling with activity,” Rouleau said. “People milling about in the busy marketplace and the movement in the four-stories buildings along the bridge are what make this scene come alive.”

Ongoing collaboration with Bauer and Kullback
Rodeo FX recently opened an L.A. office and already is seeing the benefits of bringing an experienced team on board so close to Hollywood. As the VFX business has become global, it’s essential to maintain a real connection with one’s colleagues, wherever they are. The proximity to the HBO VFX team meant that Ferrand could communicate in person with Bauer and Steve Kullback, VFX Producer on Game of Thrones, something that contributes to the success Rodeo FX continues to enjoy on Game of Thrones.

“Deak could simply get in a car and drive over to our office whenever there was a need for face-to-face clarification,” said Bauer. “Most of our vendor interaction happens via cineSync due to the far-flung nature of the companies we work with. It was a happy anomaly to have Deak so close.”

Ferrand agrees and looks forward to even closer collaboration on future seasons of the show. “When we sit down together, we’re able to develop a dialogue because we’re in the same room. Our relationship with Joe and Steve is paramount to making great work. Nothing can replace face-to-face explanations and dialogue.”

“We love helping create the fictional world of this great show and having the privilege to be on site to interact directly with the VFX team,” said Sébastien Moreau, President of Rodeo FX. “We look forward to working again with Joe and Steve so we can continue to perfect our pipeline.”

Adapted from A Song of Ice and Fire, by George R.R. Martin, Game of Thrones is produced by HBO and stars Peter Dinklage, Emilia Clarke, Lena Headey, and Maisie Williams. It is the most popular series on HBO.

For the second straight year Rodeo FX has been nominated for an Emmy Award in the Outstanding Special Visual Effects category for its work, along with other VFX studios, on Game of Thrones. The Emmy Awards will be handed out at a ceremony this Saturday at the Microsoft Theater L.A.

Rodeo FX was founded in 2006 by Sébastien Moreau and has grown to house 250 accomplished artists and professionals with studios in Montreal, Los Angeles, and Quebec City.

‘Twas the Night Before TIFF