People in movies or on TV speak in complete, grammatically correct sentences, with precision and grace. But if you go and plant yourself in a donut shop, and listen to people talking to one another, that’s not how they speak at all.

Which is too bad, because there’s a real poetry to the half-sentence, overlapped and more natural in its rhythms and vocabulary than the dialogue of most fictional screenplays.

On exactly what note do we clumsily stop speaking? What is it we are avoiding saying to each other?

In all my movies, I set out to craft characters who speak like real people, who react with authentic emotion to real situations, and who’s communication style carries the stamp of the time and place when each movie was made – through an intensely collaborative approach with my actors.

Real vernacular language is an easy doorway into the interior worlds of my characters, but also helps actors find the pieces of themselves that will be the signatures of their roles. 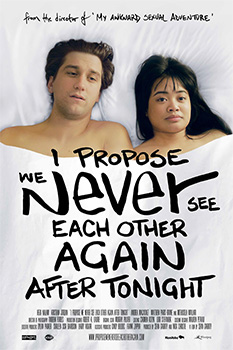 In my new film, I Propose We Never See Each Other Again After Tonight – a bonus! – we add the layer of a second language in an immigrant home. In collaboration with my Filipino cast, we delighted in mixing English and Tagalog into a spicy “Taglish” – typical not only of Filipino homes in North America, but typical of most multilingual immigrant homes.

Hopefully, audiences recognize it from their childhood experiences visiting their friends whose parents came from Hungary or Hong Kong or Honduras – or, indeed, from the experiences of their own homes.

Actors who have worked with me on more than one occasion know that as soon as they mess a line up on camera, and have to fumble to find their way back into the scene, that take is going into the movie.

Because maybe they showed us a little more of their characters – more of themselves – than they intended.

And that’s the stuff that makes the audience lean forward in their seats; the clumsily phrased sentiment, the emotionally charged mistake, the unfinished sentence.