(February 20, 2020 – Toronto, ON) Several years ago I wrote a weekly think-piece for another website and in one of those columns wrote about the “tiny lives” most of us live. In this time of a super-sized buffoon as U.S. President, having a tiny life can actually be something most of us are grateful for.

Meet Sean and Siobhan, the main characters in the 2017 feature Space & Time that will finally have a limited release tomorrow, February 21, 2020. They lead tiny lives. Siobhan (Victoria Kucher, pictured above) is an academic physicist, and Sean (Steven Yaffee) seems to be a struggling photographer, so I’m not sure how he can afford carrying around a Hasselblad. 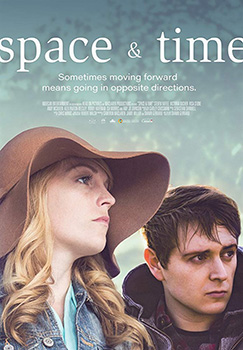 This is a slice-of-life movie where we get to spy on and eavesdrop on people who could easily be next door neighbours or friends of our friends. They are so low-key I’m not sure I would want them as actual friends, and there’s the issue.

Like many people in longterm relationships, Sean and Siobhan have reached a point where the future becomes more important than the past. Where everyone is thinking will the investment in time be worth it? In this film the situation is complicated by another time issue as both of them are facing their 30th birthdays. A discussion about wants, needs, futures together or apart leads to a nasty back-and-forth which boils over and ends with Siobhan moving out. They both need some space.

In an era where it seems you can’t make a movie without spaceships, explosions, death and an ever-expanding menu of mayhem, this breakup, like most of the movie, is gentle, civil, almost polite. When people are on the verge of a life-changing event I expect to witness a much higher level of emotional destruction.

But, here’s where the movie picks up and we meet two far more interesting characters. Andy McQueen plays Alvin, a coworker who is clearly interested in Siobhan. Sean is introduced to a weird soothsayer and palm reader named Ahkila, wonderfully portrayed by Amy Jo Johnson in a single short scene. These are minor characters who could have easily changed the trajectory of the main players but don’t. A missed opportunity in the script.

The end becomes predictable in the classic boy-meets-girl, boy-loses-girl genre of films and given what might have happened, that’s a shame. I was also disappointed with the static camera work. Movement provides energy, promises action, and can (if not overused) bring scenes to life.

I am not saying Space & Time is unwatchable, far from it. I do wish director Shawn Gerrard had cut his teeth on another feature and brought this to the screen as his second or third film. But for a first feature it’s better than many I have seen and I believe first features need to be supported. First features often die a lonely death, unseen, unspooling in empty theatres and that’s a cruel reality. And consider this, if you don’t see it, you’ll have nothing to talk about this weekend or next week and who knows where that may lead in the fragile gravity that keeps couples together.

David Cronenberg’s A History of Violence