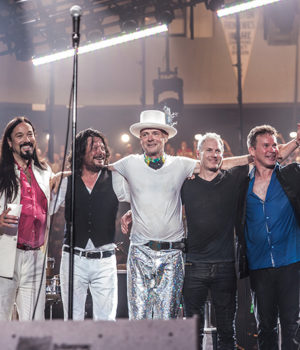 (May 19, 2017 – Toronto) Telefilm Canada and the Rogers Group of Funds have announced the latest round of funding for Canadian English- and French-language feature-length documentaries. A total of 18 films will be made thanks in part to funding support under the Theatrical Documentary Program. The films, from a surprising range of directors, will benefit from an investment of nearly 2.5-million dollars.

“Canada has long been at the leading edge of documentary filmmaking, and this year’s slate is particularly strong, featuring a diversity of voices and subject matter that explore our society and our world in all their complexity and wonder,” said Carolle Brabant, Executive Director of Telefilm Canada. “They testify to the success of our ongoing partnership—which marks its 10th anniversary this year—with the Rogers Group of Funds.

“I’m also pleased to note that women filmmakers are so prominent this year: not only are more than half of the films directed or written by women, women are also front and centre as producers. Overall, the quality and variety of films show that our increased funding commitment to this program is bearing fruit.”

Ms. Brabant added: “Although we so tragically lost filmmaker Rob Stewart earlier this year, Telefilm is proud to be a part of his last film. Mr. Stewart was a talented and committed filmmaker and activist, and I have no doubt that his legacy will endure.”

Telefilm Canada has more than doubled its investment in the program, for a total of $1.7M. This new money targeted projects directed, written, and/or produced by women, as part of Telefilm’s objective to achieve a balanced production portfolio by 2020.

This year, of the 18 projects financed, more than half are directed and written by women.

The Grand Experiment is a character-driven, observational film tracking a social innovation that has made strange bedfellows: social workers and Wall Street bankers, the homeless and venture capitalists, conservative and liberal politicians. To pinpoint the revolutionary and ironic nature of this new venture, our vérité style of filming will be adapted to the very different worlds occupied by our casts of characters.

This feature documentary (pictured) follows The Tragically Hip’s 2016 cross-Canada tour and final concert in their hometown of Kingston, Ontario, after the band’s announcement that lead singer Gord Downie has incurable brain cancer. With their mix of unpretentious grit and heartbreakingly beautiful poetic turns, The Hip maps our national, historical and emotional landscape with unexpected candour and intimacy. We have taken their music and woven it into what it means to be Canadian. This tour is the moment for all of us to stop and reflect on this shared experience and collective love. This film is the vessel that freezes that moment in time.

Pipe Dreams offers an inside look into the weird and wonderful world of competitive organ playing as it follows six young organists competing in the prestigious Canadian International Organ Competition. We’ll be with the organists in their home towns as they prepare, and follow them throughout each of the three gruelling competition rounds in Montreal. With over $100,000-worth of prize money and recording contracts on the line, tensions run high. Who will be able to master the “king of instruments” to take home the big prize?

Once the centre of New York’s bohemian scene, Greenwich Village is now home to luxe restaurants and buzzer-door clothing stores catering to the nouveaux riches. But one shop in the heart of the Village remains resilient in the face of encroaching gentrification: Carmine Street Guitars. There, custom-guitar maker Rick Kelly builds handcrafted guitars out of reclaimed wood from old hotels and other local buildings. Nothing looks or sounds quite like a Rick Kelly guitar, which is why they are embraced by the likes of Bob Dylan, Patti Smith and Jim Jarmusch, to name just a few. Featuring a cast of prominent musicians and artists, The Rick Kelly Project captures a day in the life of Carmine Street Guitars, while examining the history and changes of the colourful and storied neighbourhood of Greenwich Village.

Send Us Your Brother
Writer-Director: Nisha Pahuja (The World Before Her, Diamond Road, Bollywood Bound)
Production: Notice Pictures Inc., coproduction with the National Film Board of Canada
Distribution: Mongrel Media

Send Us Your Brother is a feature documentary about the making of the modern Indian man told through the stories of a few men—difficult, violent, fearful men—and the men who are trying to change them. Although the setting is India, the bold social experiment the film documents confronts ideas and issues being echoed all over the world.

A thrilling and inspiring documentary feature film by the late filmmaker and activist Rob Stewart to save the world’s greatest predator: the shark. Blending the epic story of the shark—its evolution, sophistication, intelligence and social life—Sharkwater: Extinction also uncovers the billion-dollar industries behind one of the greatest wildlife massacres ever known.

Take Light looks at the tangled wires of Nigeria’s electricity crisis, told through the everyday trials and tribulations of a charming electrician working one of the country’s most hated jobs.

Tomorrow’s Power showcases three communities around the world and their responses to economic and environmental emergencies. In the war-torn, oil-rich Arauca Province in Colombia, communities have been building a peace process from the bottom up. In Germany, activists are pushing the country to fully divest from fossil-fuel extraction and complete its transition to renewable energy. In Gaza, health practitioners are harnessing solar power to battle daily life-threatening energy blackouts in hospitals.

In the summer of 2017, Rick Blackburn and Louise Leroux will embark on the first cross-country horseback ride in Canadian history. Their goal? To commemorate the centennial of the First World War using a fresh lens: the story of Canadian warhorses. Few remember how the horse formed an intrinsic part of this country’s fabric—and a pillar of its economy—in the dawn of the 20th century. As such, when Canadian soldiers left for the European theatre, 150,000 horses followed and served valiantly by their side. This documentary film seeks to remind the Canadian public of the crucial role that the warhorse played in this dreadful conflict, reviving our memory of a loyal forgotten soldier.

Lepage in the Sun witnesses the extraordinary encounter of a visionary stage director, Robert Lepage, and a fabled troupe, Le Théâtre du Soleil, whose productions have been acclaimed far and wide around the globe. For the first time, these two revered giants of theatre come together to create a work for the stage devoted to the history of Canada’s First Nations people. The documentary stands at the crossroad between the creation of a play and the very particular social context in which it takes shape, while the whole world is discovering the cultural genocide to which Canada’s first inhabitants were subjected. Over time, the work becomes universal as the actors, from countries as diverse as Australia, Afghanistan, Brazil, Armenia and Iran, discover echoes of First Nations history in their own identities.

Flirting with the road-movie genre, Conditional Liberation explains why the mixing of religion and politics leads inevitably to the erosion of women rights. Actor Stéphane Archambault is in the driver’s seat on this voyage of discovery. His first stop is the Middle East, where women have lost almost all their hard-won rights. Second stop, Europe, where women’s freedoms are being weakened day by day. The winds of the right are blowing so strongly towards the West that Stéphane lands in the United States before returning home, realizing that woman rights here are also vulnerable. Director Yvonne Defour chose Stéphane because of what he himself thinks: “It’s about time that men talked about this as well.” Conditional Liberation launches the discussion for the freedom of future generations.

Mad Dog & The Butcher, The Film: a fabulous, fiction-style documentary for a fabulous sport with high-entertainment value—because reality and wrestling are sometimes staged…

On her 15th birthday, Rocío marks a rite of passage by sharing the secrets of her diary for the first time. At the age of 10, she was raped, doused in gasoline, set on fire and left to die in a field on the outskirts of the city where she lived, in Argentina. She survived…. Her distant cousin, Aldana, joins Rocío as she embarks on her personal quest. Aldana herself suffered years of sexual abuse at the hands of her own father, and only recently revealed the crime perpetrated against her. Rocío and Aldana meet, share their stories, experiences and outlook, quickly forge a close bond, and, through art, continue together to find their voices, to change their lives, to heal.

After World War II, many European cities lay in ruins. Just as in North America, cities were overwhelmed by population and traffic growth. They had to be rethought. So what did Blanche Lemco van Ginkel, Phyllis Lambert, Denise Scott Brown and Cornelia Hahn Oberlander do? They carved out a place for themselves in a man’s world, dreamt of human-scale cities and began drawing the urban centres of our future.

A documentary on the Kurdish guerrilla fighters battling in Syria. The film takes viewers into the daily life of the remarkable women who fight in the war zones, guided by their egalitarian ideals. They rebuild cities in the Rojava region (Kurdish region in Syria), where they introduce a revolutionary system, advocating direct democracy, multiculturalism, gender equality, religious pluralism and respect for the environment. While Daesh terrorizes the entire world, these combatants are the face of hope in Rojava.

Documentary with a dreamlike quality. Through the magic of cinema, Marie Guyart, better known as Marie de l’Incarnation (1599-1672), returns to visit the school that she founded in 1639 and meets modern-day Ursuline nuns. An early “media star,” her adventures were followed like a serial in the Jesuit Relations, the first large-circulation newspaper. The story is told allegorically, moving from the founding of New France in 1665, to the occupation of Quebec by the English army in 1763, to the Quiet Revolution of the 1960s, which transformed Quebec’s educational system and the Ursuline community itself. After abandoning its cloistered life and robes, the community has to reorient itself once again. High-school classrooms are converted into a daycare centre. Marie de l’Incarnation is there to welcome children when the centre opens in 2017.

The film takes viewers on a whirlwind trip into the world’s most diverse biological environments to show the scope, richness and seriousness of what is at stake. The subjects profiled in the film are all deeply engaged, eloquent and innovative: scientists, artists, activists, philosophers, entrepreneurs. Their fields are varied (land, forest, marine, urban); their respective stories and the situations in which we meet them are original. Hubert Reeves devotes all of his science, media clout, scientific knowledge and energy to a cause: saving biodiversity. In recognition of this commitment, he was recently appointed the first honorary chair of the new Agence française pour la biodiversité.