That Never Happened on CBC documentary
by Staff

(November 19, 2019 – Toronto, ON) While we hope most Canadians are aware of the shameful past and continuing injustices between our government and the many Indigenous nations that are held within our borders, there are other histories that many if not most people do not know or maybe never heard of. While the internment of Japanese Canadians during World War Two has been fairly well documented, it may come as a total surprise to learn the same fate was foisted on Ukrainians and other Europeans from the start of World War One until long after that war ended. 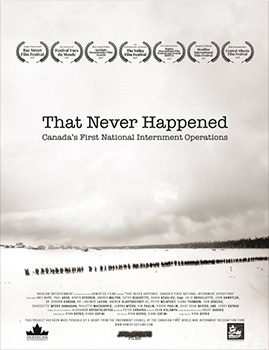 Winnipeg-born writer-producer-director Ryan Boyko’s award-winning documentary That Never Happened is a stunning examination of a truly shameful chapter of Canadian history. An era when people who had escaped the death and destruction of the Russian Revolution and had sought refuge and started new lives in Canada were forced first to register and then watch as thousands of them were rounded up. How many? Some 8,500 people were wrongfully imprisoned in internment camps across Canada between 1914 and 1920 because of the counties they came from.

Released theatrically across Canada last year, and an Official Selection of the Permanent Mission of Canada to the United Nations in September 2018, That Never Happened screened for the Human Rights Council in Geneva, as part of celebrations marking the 70th Anniversary of the Universal Declaration of Human Rights. That Never Happened: Canada’s First National Internment Operations, will air on CBC’s documentary Channel tomorrow, Wednesday, November 20th at 9pm ET/PT. It should not be missed.

Click here to watch the trailer and learn more about That Never Happened.