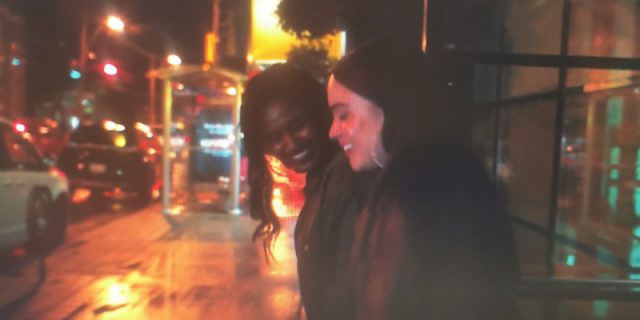 (September 10, 2022 – Toronto, ON) A lot of support and excitement at the premieres of two Canadian films from first-time filmmakers. Director Joseph Amenta presents their film, Soft (previously listed as Pussy) and V.T. Nayani arrives with her film, This Place. Both films, Soft, and This Place explore the experience of being young, BIPOC, and Queer.

Soft is a coming-of-age story focussing on three young Toronto friends, Julien (Matteus Lot), Tony (Zion Matheson), and Otis (Harlow Joy) who—as former Now Magazine critic Norm Wilner points out during the film’s Q&A—know who they are but still don’t how the world works. Amenta allows his young performers to explore their characters and discover how they relate to each other, and their struggle to find their place in the world.

Controversy has already swept down on Amenta’s Soft not because of content, unless an opening title card can be considered content. Soft was originally called Pussy—it’s how the film was presented on the festival schedule and still appears on screen like a force that refuses to leave. When asked about the name change, Amenta doesn’t bother to conceal his frustrations, pointing out that ‘pussy’ is the most used word in the movie and that in the context of the film, it means nothing more than a childish (Amenta used the word ‘derogatory’) put down.

The audience sides with Amenta. And though I agree that Pussy is a better title than Soft, ownership of the word is essential. And Amenta doesn’t help his case by admitting that the word Pussy is used in a derogatory way. I’m not convinced that Amenta’s explanation dispels any concerns.

But by any title, Soft is a moving depiction of kids on the cusp of discovery.

This Place (pictured at the top) is a queer love story set in Toronto. Two young women, one Iranian/Kanien’kehá:ka (Mohawk) and the other Tamil, begin a relationship despite the complexities of cultural differences and family histories. Priya Guns plays Malai, a promising student encouraged to continue her post-graduate studies but fears the financial burden it would put on her brother, who supports them.

Before the screening, director V.T. Nayani took to the stage and reminded the non-BIPOC and non-Queer people in the audience that they should consider it an honour to be invited to hear the stories of struggle, pain, and healing from the Queer and BIPOC community. This Place can be viewed digitally through digital TIFF Bell Lightbox at 10 a.m. (Canada Only).

Canadian films screening tomorrow, September 10 at the festival include:

The Young Arsonist screens at 2:15 p.m. at Scotiabank Theatre Toronto.

Flight 752 is Not a Number screening at 3:15 Scotiabank Theatre Toronto