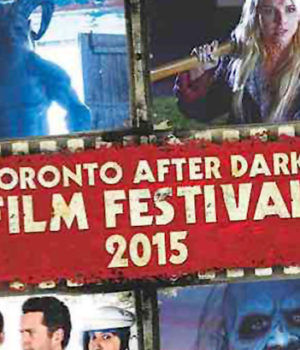 (October 14, 2015 – Toronto, ON) It is one of the most popular fringe film festivals in the country. It’s so popular to be mainstream within its genre. The 2015 Toronto After Dark Film Festival kicks off tomorrow and runs until October 23 with a lineup of Horror, Sci-Fi, Action and Cult Movies to keep any fan happy for a long, long time.

The problem with popularity is serving your audience. In the latest media release the festival points out that 6 of their 20 screenings have already sold out and their terrific All-Access passes are more than 90% sold out. The pass gives maximum convenience with priority line entry to all 20 screenings at the fest (including sold out films) for just $149, which works out to just $7.50 a show. That could explain why all 200 passes sell out every year.

What’s in that 20 film lineup? Some of the most buzzed about films at this year’s Festival are The Hallow, the scary Sundance horror hit about terrifying creatures lurking in the forests of Ireland; Lazer Team is the sci-fi action feature debut from web series gods Rooster Teeth; then there’s A Christmas Horror Story featuring Santa vs Zombie Elves, and Deathgasm, the New Zealand horror comedy that’s taken the world circuit by storm.

As always there is more information on the films and ticketing online.

Jason Priestley Gets The Code