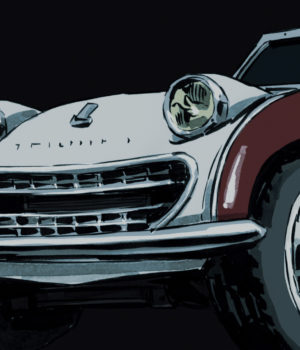 (November 19, 2015 – Los Angeles, California) – The Academy of Motion Picture Arts and Sciences has announced that 10 animated short films will advance in the voting process for the 88th Academy Awards®. Sixty pictures had originally qualified in the category and out of the 10 semi-finalists, two are National Film Board of Canada (NFB) productions. Those films are Carface (Autos Portraits), directed by Claude Cloutier and If I Was God…, directed by Cordell Barker.

In CarFace, a 1957 Chevy Bel Air performs an ironic take on the American ballad “Que Sera, Sera (Whatever Will Be, Will Be).” The radiator grille morphs into a cajoling pair of lips, crooning the reassuring rhymes, while a spectacularly choreographed choir of cars sings backup. A scathing satire of the power of Big Oil, Carface is musical comedy on a grand scale, with filmmaker and cartoonist Claude Cloutier skewering carefree contemporary attitudes toward the threats to our planet. The image we have used is of a Triumph TR3.

Cordell Barker’s film asks the question, What would you do if you were 12 and suddenly found yourself charged with God-like powers? Would you use them for good? For bad? Perhaps a little of both? For one Grade 7 boy whose mind starts to wander while dissecting a frog in Biology class, the possibilities seem endless: having the power to toy with life and death, to create monsters who can punish those who torment him daily (in particular, Augie, who sits in the back row), and, more importantly, to create that one perfect day with Lily, the love of his 12-year-old life.

Following is the complete list of all 10 films in alphabetical order by title, with their production companies:

Short Films and Feature Animation Branch members will now select five nominees from among the 10 titles on the shortlist, with Branch screenings to be held in Los Angeles, London, New York and San Francisco in December. The 88th Academy Awards nominations will be announced live on Thursday, January 14, 2016, at 5:30 a.m. PT at the Academy’s Samuel Goldwyn Theater in Beverly Hills.