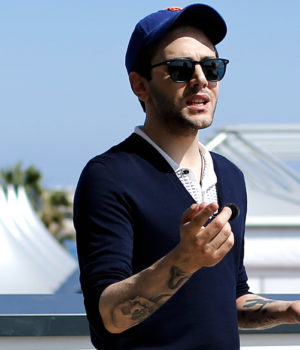 (May 22, 2016 – Cannes, France) He’s been here before and he has won here before but today was very different for Québec filmmaker Xavier Dolan. His first trip to the film capital of Europe (if not the world) was in 2009 when his first feature, I Killed My Mother, picked up three awards: the Art Cinema Award, the SACD prize and the Regards jeunes prize. Dolan was all of 17 when he wrote the screenplay. Then in 2014 his film Mommy shared the jury prize with French filmmaker Jean-Luc Godard. This time his film, Juste la fin du monde has been recognized with two awards at Cannes.

On Saturday, Dolan’s film won the prize of Ecumenical Jury for its “human qualities that deal with the spiritual dimension.” Costarring Vincent Cassel, Marion Cotillard and Léa Seydoux, the feature is based on a play by Jean-Luc Lagarce about a man who returns home after a long absence, only to tell his family that he is about to die. The win came as a bit of surprise for some as it had not been well received at its screening, nor by critics. Dolan had called the film his “best yet.”

If that win was a surprise, the announcement this evening at the 69th Cannes Film Festival that Juste la fin du monde had won the Grand Prix proved the critics wrong and Xavier Dolan right. The Grand Prix is second only to the coveted Palme d’Or, which went to British filmmaker Ken Loach for I, Daniel Blake.

Only one other Canadian film has won the Grand Prix at Cannes and that was Atom Egoyan’s The Sweet Hereafter. No release date for the film has been announced and Juste la fin du monde will probably stay on the festival circuit for most of the balance of this year.