Home News You Me Her on HBO 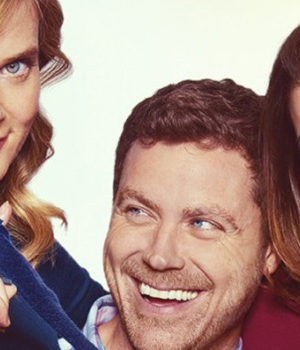 (July 7, 2016 – Toronto, ON) The new polyromantic comedy You Me Her promises to add even more heat to an already hot summer when it makes its debut this Sunday, July 10 at 8:30PM Eastern on HBO. The 10-episode, half-hour Canadian series from Entertainment One (eOne) infuses the grounded and relatable sensibilities of an indie rom-com with a distinctive twist.

In You Me Her, a whirlwind affair takes place between a “normal” suburban married couple Jack (US actor Greg Poehler, Welcome to Sweden), Emma (Rachel Blanchard, Clueless, Fargo), and Izzy (Priscilla Faia, Rookie Blue), a grad student moonlighting as an escort.

After dealing with fertility issues for several years, Jack and Emma find themselves more in like than in love. When they independently meet Izzy, all three of them are smitten. Jack and Emma decide to engage in a ‘business relationship’ with Izzy, which quickly evolves into something more.

Filmed in Vancouver, You Me Her was created and written by EP/showrunner John Scott Shepherd, author of Henry’s List of Wrongs and creator of The Days (ABC) and Save Me (NBC), and directed by Nisha Ganatra (Transparent, Shameless, Married).

eOne is financing, producing and distributing You Me Her worldwide, with John Morayniss, CEO, Gerard Bocaccio, SVP US Scripted Development, and Debra Curtis, SVP Current Programming, overseeing for the studio and Jonathan Schwartz producing. Alta Loma Entertainment’s Peter Jaysen serves as an Executive Producer along with Alan Gasmer (Vikings).

Women filmmakers in the Spotlight