Zacharias Kunuk in Venice
by Staff

(May 8, 2019 – Toronto, ON) La Biennale di Venezia is one of the most prestigious art exhibitions in the world. This year, 18 years after the release of his first feature film, director and artist Zacharias Kunuk, along with Norman Cohn and the collective known as Isuma will be in Venice at the Canadian Pavillion.

While Cape Dorset artist Kananginak Pootoogook was featured in the 2017 Biennale, his work was part of the Biennale curator’s exhibit. This year will be the first time Inuit artists will be showcased in the Canadian Pavilion. 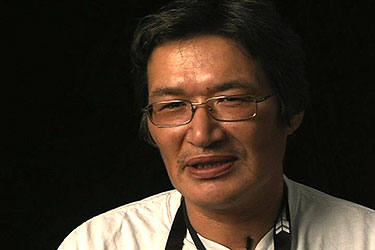 Isuma is the name of the groundbreaking and award-winning Inuit video-based production company, co-founded in 1990 by Kunuk (pictured), Cohn, Paul Apak Angilirq (1954–98) and Pauloosie Qulitalik (1939–2012) to preserve Inuit culture and language and to present Inuit stories to Inuit and non-Inuit audiences around the world. The word means “to think, or a state of thoughtfulness” in Inuktitut.

Kunuk, who was born in 1957 in a sod house on Baffin Island, along with Isuma, won the Caméra d’Or at Cannes in 2001 for the Inuktitut-language feature Atanarjuat (The Fast Runner). His new film, which will screen during the Venice Biennale, is a documentary that runs 112 minutes and is titled One Day in the Life of Noah Puigattuk. It tells the real-life story of the elder of one of the last nomadic Inuit families who, in the early 1960s, were forced by RCMP officers to settle in nearby Igloolik.

Kunuk has been making films for more than 30 years and says he wants to use the space at the Canadian Pavilion in Venice to welcome visitors to an Inuit way of life. The Venice Biennale opened yesterday, May 7, and continues until July 1, 2019, which happens to be Canada Day.