A Stellar Opening for imagineNATIVE
by Ralph Lucas, Publisher

(September 21, 2022 – Toronto, ON) The 2022 edition of the world’s largest presenter of Indigenous screen content, the imagineNATIVE Film + Media Arts Festival, has announced its schedule and the opening is literally Stellar. Costarring Elle-Máijá Tailfeathers, Braeden Clarke & Rossif Sutherland, Stellar is set in Northern Ontario as a meteorite has catastrophically changed the planet. But inside a small bar, two lovers transcend the traumas of one world and find a path to a new one. The feature from writer-director Darlene Naponse (Anishinaabe) explores human notions of connections between oneself, other people, and Mother Earth herself. The Opening Night Gala is on Tuesday, October 18. 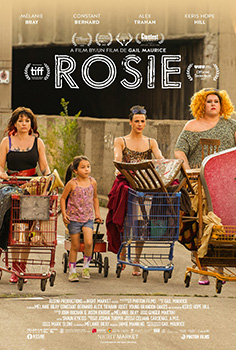 When the festival wraps 5 days later on October 23, the Closing Gala feature is Rosie by Gail Maurice (Cree/Métis). The film is about family, love, and misfits, Rosie tells the story of a young, orphaned, Indigenous girl who is forced to live with her reluctant, street-smart Aunty Fred, on the fringes of 1980s Montréal.

With optimism regarding the seemingly weakening COVID pandemic, the festival will have in-person events during the full run of the festival October 18-23, followed by online festival selections becoming available October 24-30, 2022.

Fade Out in Montreal