(November 14, 2019 – Toronto, ON) Proof that it’s impossible to be in two places at the same time can be proven by any journalist trying to cover a film festival and working with a complicated schedule of what’s screening where and when including pre-festival media screenings. In short, I missed this film when it played at Hot Docs earlier this year.   I wanted to see it for a bunch of reasons but primarily it features two of my favourite people. The wise and often ribald Monty Python comedy legend John Cleese (pictured above), and documentary filmmaker John Walker. I’ve never met John Cleese but I have met and interviewed John Walker so I really wanted to see his new film. If you, like me, missed it, or never had a chance to see it in the first place, Assholes: A Theory is about to open in a sort of helter-skelter hop, skip and jump schedule across part of the country. 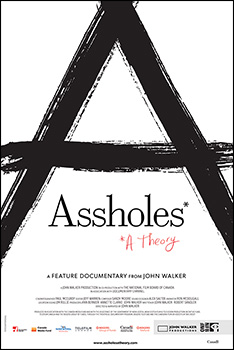 What’s it all about? A line in the media release says it all. We live in a time of “venomous social media, resurgent authoritarianism and rampant narcissism threatening to trash civilization as we know it.” John Walker holds a cinematic mirror up to all that nonsense and with some terrific on-screen help he explains why A-holes thrive in certain environments and how they keep getting elected.

NOTE: John Walker will attend the November 30 screening at 2:30pm at Cinéma du Parc, Montréal and will participate in a Q&A on Sunday, December 1 at 9pm at the Hot Docs Ted Rogers Cinema in Toronto.